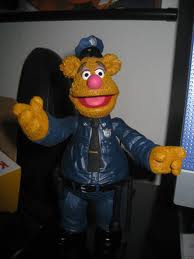 The ATV show made a star of lots of the puppets called The Muppets. Created by Jim Henson, the 1970s show as a phenomenon hit worldwide, and of course we all wanted to have Muppet toys in our homes.

So in the late 1970s we could have our green Kermit frog, the crazy drummer Animal. But I think my favourite would be Fozzie Bear, with his heat hat Fisher Price launched the puppets , and also had great success with stick puppets of the main characters from the show. Of course the beautiful Miss Piggy was one of the favourites in whatever product her image was associated with.

Into 1979 Corgi released Muppet cars, these were a yellow car for Kermit, Red for Fozzie and of course Miss Piggy had a Pink convertible.

The toys were very limited really, but the Muppets are still hugely popular around the world, but the 1970s was their prime, we had the Muppet colouring books, bags, stationery and lunch boxes and T Shirts.
The sister show from the US from Sesame Street not only entertained the kids of the 1970s, but also educated them.

Although the Americanisms meant it was dropped in the 1970s in the UK, however they are still extremely well known to the British audiences, but we all know Big Bird and Elmo.