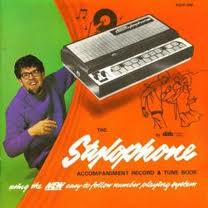 Not sure if we really should call this as a toy, but it was sold to us kids so for the sake of argument lets say it is allowed in our list.

The Stylophone was invented in 1967 by Brian Jarvis and is a palm sized synthesizer, which is amazing when you consider it was 1967. The small metal box had a very few non moving piano style panels on the front, and when you moved a pen type instrument across it a sound, or musical note was produced by the use of electrical impulse.

Now it sounds very basic, but for it’s time it was eye-popping to the kids of 1970 when it was launched across the country. The man that launched it was kids favourite Rolf Harris, who had just had the very first number one of the 1970s with “Two Little Boys”, he also had a TV series so he was a well known character, and when he put his name behind the product, we listened.

Rolf Harris would also appear on TV programmes explaining the product, he released LPS to show us what we could do, and the more he spoke about it the more we wanted this amazing musical instrument.

It was even used in a 1974 episode of Dr Who, now how about that for product placement? It was used as a communication tool for aliens, well we all knew it would be.

But in 1975 the product was stopped, it had had it’s time, and we remember it with nostalgia and love, but now we can do a thousand times more on our PC or even on our phones.