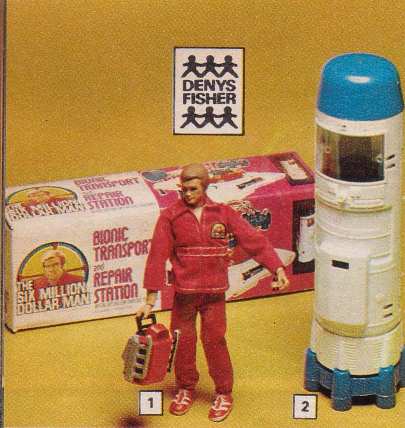 Made by Denys Fisher

We can rebuild him, we have the technology to make him better, faster but alas couldn’t improve his acting ability but we was all glued to the TV to watch Lee Majors kick all the baddies asses in each episode.
So it wasn’t long before the merchandising guys got onto the bandwagon and produced these beauties.

The Six Million Dollar Man Figure had a bionic arm which had roll back skin to reveal removable modules and he also sported a bionic eye.

To keep Lee in tip top condition you could also buy his “Bionic” transporter and repair station which opened up into a complete operating theatre with revitalisation equipment for his “Bionic” system.

If they made a remake of it today I wonder what they would call it with today’s inflation?