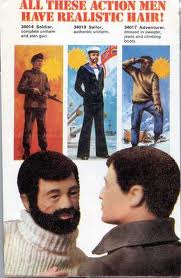 Now if you were a UK based kid, we would not know what a GI JOE toy was, but we did know what Action Man was. The Action Man was launched in the UK in 1966, and then was made under license in the UK by Palitoy from the Hambro version of Gi Joe in the US. This was the action doll that dominated my early 1970s life.

The British version was always a little ahead of the American counterparts in the ability to have extras, and high quality clothes and equipment. We had the Lifeguard Horse, but our Action Man was not as tall as the US or even the Canadian version. But he did later in the 1970s have swivel eyes, and great costumes that you could swap around, depending on which mission you decided to send him on.

Of course we all noticed that there was something missing with the body parts, and we all knew that Barbie had the girly bumps, but not matter how tough Action Man was he was missing something. The doll was very strong, I remember having mine for many years, and he survived bath time, he survived jumping from my bedroom window to the cement floor, and he often survived the giant Dog that would drag him around the garden.

The early Action Man were very clumsy, as their hands just did not grip anything well, but in 1973 he came with gripping hands, and that made him an even better toy to play with, especially as his accessories were usable now.

One thing that we all knew was that Action Man could be in the Army or the Navy (I think he came with a full beard for that one and a big white jumper) or a Special Agent, but what I did not know was that there was a George Best Action Man too. Now I never came across that, did you?

His accessories were numerous, and it really seemed that the makers cared that we did not get bored, and they cared that the accessories looked real too. As an infantry man, our action hero had gas masks, canteen, belts, shoes and a selection of guns. He was a hugely versatile toy for the boys of my generation.

You could put him in Jeeps, Boats and helicopters. He would even have a diver’s suit and snorkel, but that always took ages to stretch on the doll, and wasted valuable playing time.