Now whenever you see this, it seems to be one of the iconic images of the 1970s, and if you were there you used one. The most popular version of the hopper was the huge orange one with a great big smiley of some sort of monster with a big smile. The monster was supposed to be a Kangaroo, I cannot see the resemblance at all. 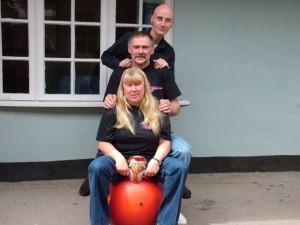 Those that cannot recall what a Hopper is, then imagine a huge balloon the size of a medium dog, that is made of very tough plastic with at the top two ears that we used as handle to hold on to. The Hopper came in many colours, and with several variations, but the most remembered one is the orange monster one.

So what did we do with this plastic bag of air? Well we sat on it, and grabbed the handles and bounced up and down, moving forward as we did so. Yes that is it, it had no other use, we just did that. We did it in the house, in the garden, in the park and even on the roads too.

The US market called it Hoppity Hop, and whatever it was called you had to blow the thing up regularly, as the constant bashing it got from us made it deflate a little. So with the use of a bicycle pump, we would pump it to all most bursting point. However, to be honest our household could never do that. We took it to the air machine at the local garage, and just like a real balloon you always waited for it to overfill and explode, and it never did in our house.

Although you would see the ladies using the Hopper mostly, us boys would grab them and have Hopper races, along with taking the Hopper and ourselves to a top of the hill, and throw ourselves down. We must have done it for a reason, but what it was escapes me now.