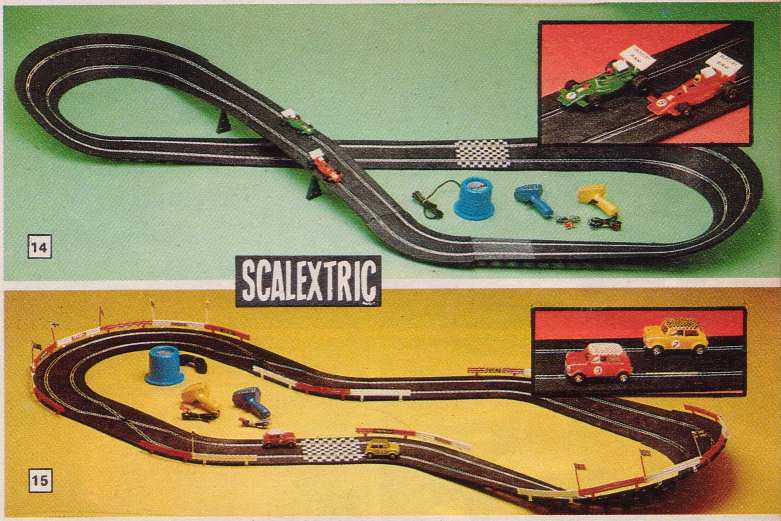 Now it was way back in the 1950s when the Scalextric started, and it really developed into the boys toy of the 1970s, well shall we say boy and dads toy of the 1970s. I often think back, and look at my dads motives for buying the cars and tracks, as it seemed HE had to set it up, HE had to test the cars and HE would arrange all the bridges and grandstands.

There is no doubt about it, this was a fun toy. I remember my first set, which if I remember correctly had a wire and battery control attached by a long lead to the toy car. This meant you had to run around after the car as it sped around the course, of course you d/id not have to run far as it was always coming off the track.

It was a relief when the course and tracks were electrified themselves, and you could sit on the floor and play with the remote and watch tour car come off the track every few seconds. Of course it did mean getting up, and putting it back on, and starting again and again.

It was great when you actually could have a proper race, and that was where the fun and excitement really came from. It was a nightmare to see if you could get your car pass the other, before it went into one lane, it was pure fun.

In the 1970s the cars just looked great. They were colourful and very well designed, like the Lotus 72, Ferraris and Mercedes Wankal, and other such names that really meant nothing to me then. The cars also had Bond themes and Starsky and Hutch, so they really kept up with the 1970s styles. This of course meant we all asked dad for more cars.

Amazingly he would often say yes, as long as he was the one to try it out first. This would take him hours, before it was OK for me to use it. Thanks dad!