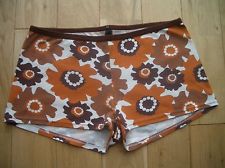 Shorts with bib ‘n’ brace, very often made from crimplene! Some had turn ups. You could also get hotpants in a one-piece set – like a truncated romper suit and a nightmare to get off when you went to the bathroom. Some things have improved over the years. Just ask yourself, who looked better in Hotpants, Babs from Pans People or Kylie? (1971)

Along with the wonderful mini skirt, the Hotpants are probably the most loved, and the most missed piece of 1970s fashion. Well that is according to the men. It is true that some guys in fashionable places were wearing these too in the zany era of the 1970s, but the women wore them better and took to them in their millions. The pants were normally very short, and cut off just a few centimetres from the start of the leg, although not usually as bum cheek revealing as shorts became decades later.

The term Hotpants was a little generic, but although there were several lengths, for some reason we remember the shortest ones best. These short trousers were often made of velour or velvet and they were very tight fitting. It was great to watch the girls on the dance floor wearing these sexy revealing garments. The whole idea of those Hotpants was to make the beautiful rounded bum look even better, and to really show off the legs too. One great look was to team hotpants with knee high plastic boots – preferably white, for film star appeal that made you looked as if you had walked out of an episode of Jason King a popular 70s TV show.

For a brief period in the early 70s, it seemed that everyone was wearing hotpants. Air hostesses, film stars, pop stars, office workers and school kids, people even got married in hotpants. They were much easier to wear than the mini skirt because they gave women the freedom of movement – so there was a sense of liberation in wearing them that appealed to all ages and styles. Although this was a sexy look, hotpants were popular with school kids. This may seem wrong today but it was not unusual to see 10-year-old girls wearing hotpants. After all, they were only shorts!

What a lot of people do not realise is that the Hot pants were actually a great 1960s left over, and were brought into London fashion by no other than fashion guru Mary Quant herself. It was also Mary that brought us the similar Mini skirt too, so really did have a huge influence in the look of women’s wear in the amazing 1970s.