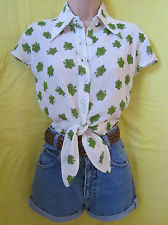 A Cheese cloth shirt was a handy item for people who hated ironing – this cotton based natural fabric had a crumpled appearance that was part of the look. I loved these in the mid 70’s when Status Quo were in their heyday. These cool shirts matched well with your Levi or Falmer Jeans and looked good when teamed with a huge buckled belt. Every Saturday when I worked the market I used to take a stroll into Mr Byrites and look over all the lovely shirts they had there and I always hung around those cheese cloth shirts the most.

Cheesecloth was not made actually of cheese. I found that out by asking my friend in the 1970s. How dumb was I? In fact cheesecloth is loose woven cotton cloth that gets its name because this material used to be used in cheese production. It is perfect for straining the curds from the whey and helps hold the cheese together as it forms. Cheesecloth started being used for clothes in the late 1960s but came into its heyday in the 70s. Cool and comfortable, it was something that both the boys and the girls could wear. Checked, gingham or plain, cheesecloth was a versatile material that was very popular.

The ladies would often tie the middle of the shirt in a knot or bow, and the clothes were a little bit transparent. Quite often there was a row of tiny buttons up the front. It was a homespun natural and very sexy look.

You often would watch Top of the Pops and see Pans People wearing cheesecloth over a very bright bra. The best colour was white, as the studio lights would sometimes seem to make them disappear. Some of the guys on Top of the Pops would also wear cheese cloth shirts with a few buttons open, the classic 1970s medallion man look.