Posts Tagged With :   The Goodbye Girl

Richard Dreyfuss – long ago I convinced myself I was a star, that I was special 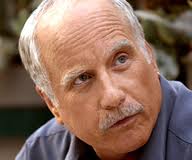 Some actors are just lucky. Richard Dreyfuss, for instance, doesn’t even look like a movie star but out of his five movies released so far, three, American Graffiti, Jaws and his latest Close Encounters Of The Third Kind are huge box office winners. Of Close Encounters Columbia pictures figure it will be the most successful film in their 50 years of moviemaking. Dreyfuss has another finished film, The Goodbye Girl, a romantic comedy by Neil Simon which co-stars Simon’s wife, Marsha Mason.

“I’m not a star,” he protested.”I still have the same name, Richard Dreyfuss, that I used to write on my assignment papers in school. I don’t feel any different than I did in those days except I must admit it blew my mind the first time I saw my name spelt out in big letters on a marquee.”

“I was driving down Hollywood Boulevard with a girl and I let out a yell when I saw my name up there. I drove by the Theatre five times before I’d had enough of that.”

And he still insists his life hasn’t changed?

“Well, it’s changed in some areas,” said Dreyfuss. “Now I get a lot of calls from girls. In school I wasn’t exactly what you’d call popular with the opposite sex. The most beautiful girls in school, the ones everyone wanted, didn’t want me. Or if they did, I didn’t know it.

“I remember a pretty girl once asked me why I didn’t come on to her. I told her it was because she didn’t tell me to. She insisted she had, and 1000 subtle ways. I told her ‘ don’t be subtle because I’m not subtle. I don’t understand subtlety. If you want me, tell me, because I don’t have the courage to tell you.”

“Getting back to that idea about being a star,” said Richard. ”I have a couple of other thoughts about that. You’re only a star if you’re constantly aware of it and I’m not. The reason I’m not, and this sounds arrogant, is that long ago I convinced myself I was a star, that I was special. So I just got used to the idea long before I ever made it.

“In the beginning it was an emotional reaction, part of my desire to be different. I have a big ego and I’m selfish. But selfish to me is never been a bad word. And an artist has to have an ego. If he doesn’t believe he’s unique he’ll never make it.”

Dreyfuss realises, of course, that talk of art and artists doesn’t mean much in Hollywood.

“You are judged by your value as a box office commodity,” he said. “It’s taken me two years of hard drinking to get used to that idea. The number of lies they tell you in order to have your name on a piece of paper, so they can raise money to make an $8 million movie, is enormous. They’d sell their grandmother, you know, to get the money to make a movie. Hopefully, a movie that will make a lot of money. “But I can accept that kind of attitude now. After all, it’s part of the business I chose for myself.”

“My mother once asked me what would have happened if the family hadn’t wanted me to be an actor. I told her I would have left the family. You know what she said? ‘That’s exactly the right answer.’”

He says his next film The Goodbye Girl is a kind used to see as a kid and wanted to star in when he grew up.

“I play a nice guy, a struggling New York actor, who has an affair with an ex-Broadway dancer. That’s Marsha. She has a nine-year-old daughter played by newcomer, Quinn Cummings. My characters outstanding because he’s incredibly decent. Neill wrote the script with me in mind.”
Actually The Goodbye Girl was inspired by Bogart Slept Here, a film Simon wrote about an actor who scores big in New York and goes to Hollywood to be a movie star. Filming started originally with Marsha Mason and Robert De Niro as the actor. But director Mike Nichols evidently disagree with De Niro’s interpretation of the role and the project was cancelled.

So Simon provided an entirely new script focusing on the actor before he becomes a New York stage success with Dreyfuss firmly in mind for the leading male role.

“I went to the movies every day as a kid. When I told my mother I wanted to act for a living she told me I better get out there fast and do it,” says Dreyfuss. “I tried the lead in The Graduate.

“Well, every young actor in New York and Los Angeles was up for that part. Dustin Hoffman got my role and I got a part with two lines.’ Shall I call the cops? I’ll call the cops.’

My Valley of the Dolls role was even shorter. I got to knock on Patty Duke’s dressing room door and say,’5 minutes, Miss O’Hara.’”

Better parts followed but Dreyfuss wasn’t really noticed until his Baby Face Nelson role in Dillinger in 1973 and, the following year, for his brilliant performance in The Apprenticeship of Duddy Kravitz.

Now, Richard definitely is one of Hollywood’s top stars