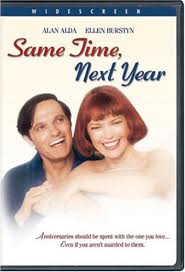 The premise of same time next year is simple: Ellen Burstyn portrays Doris, a housewife from Oakland on her way to a religious retreat when she meets George (Alan Alda), an accountant from New Jersey who is on his way to do the accounts of a friend. It is 1951 at a Northern California Inn and both George and Doris are happily married with three children each, and both are faithful to the respective spouses, until they meet.
They have conflicting emotions about the great night they spent together but finally decide to meet again same time next year at the same guest cottage.

They then have a very satisfying love affair once a year for the next 26 years, during which time they make love 113 times (who counts?), face problems and go through many changes in irrespective lifestyles.
Ellen Burstyn created the role of Doris on Broadway to high critical acclaim and the 1975 Tony award for best actress. Alan Alda, of course, stars in the long-running TV series, M*A*S*H Bolton Gottlieb, who produced the play on Broadway, is co-producing with Walter Mirisch and the film is being directed by Robert Mulligan.

Said Mirisch, “I saw the play on Broadway and bought it immediately. Universal then gave the Mirisch Corporation the go-ahead to make it into one of the studio’s top productions in 1978. That we intend to do.”

Of course, in a film that spans 26 years, the big problem is ageing the principles. This job fell to veteran make up man William Tuttle. “I was challenged with devising six different make-ups in order to portray, in five-year intervals, the ageing process and the lifestyle changes that occur between the two married lovers,” he said.

The same problem befell costume designer Theodora Van Runkle. She said, “I had to design six different sets of costumes, again in five-year intervals and they had to reflect the styles and social conditions as well as Doris’s individual psychological, educational, and economic outlook for each period.”