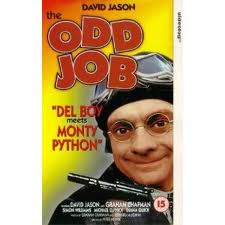 Graham Chapman, best known for appearing in and writing the award-winning Monty Python TV series, is the star, writer and co-producer of a crazy, bizarre, madcap, loopy, loony feature film, the Odd Job.

Also starring is David Jason, who is the star of TV’s A Sharp Intake of Breath. He plays the odd job man who finds employment with Graham Chapman, an insurance executive whose wife, played by Diana Quick, has left him after 10 years. The odd job man’s mission is to arrange Chapman’s suicide regardless of any subsequent instructions to the contrary. Unfortunately (depending on how you look at it) the wife returns and the suicide is cancelled, but the odd job man remembers to ignore subsequent instructions.

The Odd Job, filmed Shepperton Studios, is Graham Chapman’s first film since Monty Python and the Holy Grail, the producer of which, Mark Forstater, is also the producer of this new film. Peter Medak, whose films include A Day In The Death Of Joe Egg and The Ruling Class, is the director.