Posts Tagged With :   the stud 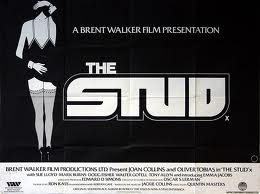 “This is 1978 will stop you open a popular newspaper and see a nude woman on page 3. The paper is on view all over the house so it seems a bit silly not to show nudity on the screen, doesn’t it?”

Joan Collins talking, very candidly, about today’s nude movie scene and about her new movie, somewhat of a scorcher, called The Stud in which she plays the Jetset nymphomaniac who keeps herself well supplied with young men.

It’s a story about a woman who has everything, husband, money, position, yet in reality has nothing and through boredom has to add excitement to life through a series of affairs.

“I don’t mind being seen in the nude,” says Joan.”There’s quite a few scenes in The Stud which show sexual activity between people without their clothes, but it’s not a case of “wham, bang, thank you ma’am.”

She shrugged. ”Who needs all that sort of thing? I don’t think sex on screen is terribly attractive anyway. I find it incredibly boring. I fell asleep during Deep Throat. It was unbelievably ugly will stop is a bit like watching someone eat. I mean eating his very enjoyable but you don’t want to pay to see someone sitting in the hay eating steak and chips.”

That being said, however, we going to see quite a lot of Joan, literally, in the Stud, a movie based, incidentally, on the novel by younger sister Jackie. What to keep on what to take off has been a constantly recurring problem for Joan during her 25 years in the business. When she was just 16 she appeared in Britain’s first ever X-rated film Cosh Boy.

“It was considered to be incredibly daring,” says Joan. “I was a young girl who is raped. All they showed was a close up of my face then dissolved to the next scene where I announce I’m pregnant.” She laughed.

Things were still pretty restricted when she went to Hollywood as an 18-year-old. Cleavage was the main problem then. “The wardrobe lady used to measure my cleavage, laughed the 42-year-old star. “Only one and a half or 2 inches were permissible exposure. They didn’t care about padding or uplift. If too much was showing in went a disguising flower.”

“It was the first time in one of my movies that I had gone to bed with a man and then it was on top of the covers.” She smiled. The final veil was removed in 1969 in The Executioner. I did my first nude scene in that then they cut it out to get an ‘A’ certificate.”

Today, in the late 70s, it’s really a case of too many actresses jumping on the nudity bandwagon.”There was a stage, not so long ago, when an actress had to fight to keep her clothes on,” says Joan. “I think now though we have reached the peak of eroticism. Nudity, as long as it’s an integral part of the story, as long as it’s not gratuitous, is fine. I feel that showing bosom or bottom is the same as being seen in the bikini, as long as it looks good of course. I’m not particularly shocked by language any more either,” she adds, “and in The Stud you’ll hear this lady say plenty of four letter words.”

“The Stud is a story of today. It’s about contemporary human relationships, and sex is an integral part of that.” She smiled, remembering back 25 years. “You can’t end with a kiss these days.”