Vampire Circus – 1972
Human fangs ripping throats – no sawdust can soak up the torrent of blood! 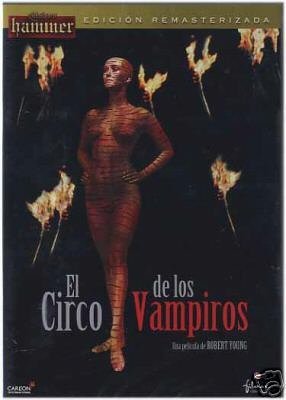 Look Beyond The Poor Production Values
… And you`ll find a pretty good story in there
It`s interesting to note that just about everyone on this page enjoyed VAMPIRE CIRCUS . I can take or leave horror movies especially ones involving vampires because they`re self limiting , ( I mean how scary is a person with false teeth ? ) and for much of this movie we`re treated to some substandard production values typical of Hammer studios in the early 1970s , the circus arena is supposed to be in the open air but is obviously filmed on an interior film set , the editing and special effects are really poor , there`s a sequence with villagers being thrashed to death with a rug ( Well that`s what it looked like to me ) while the cast are very uneven with John Moulder-Brown as Anton being just about the most unlikely hero I`ve ever seen in a horror movie . Oh and there`s plenty of scenes with people with false teeth like those ones you buy at a joke shop

But… …despite all this VAMPIRE CIRCUS is a very entertaining horror movie . I don`t if it`s because I`ve seen too many smart ass post modernist American horror flicks recently but a story featuring a Central European village being cut off from the outside world because of plague and its inhabitants being killed one by one by a bunch of vengeful vampires appeals to me more than a self referrential story set in 21st century America . In fact many of the killings are paedophillic murders so this gives the movie a disturbingly adult strength in what could easily be dismissed as a silly movie