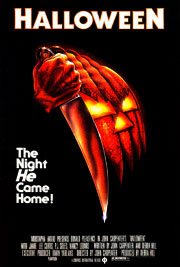 Though 70s horror films included a few gothic holdovers from previous eras, including The House That Dripped Blood (1970) and Dracula (1979), horror films in the 1970’s were largely influenced by the emergence in the previous decade of the psychological horror film. This originated in Alfred Hitchcock’s ‘Psycho’ (1960). Though Michael Powell’s British film ‘Peeping Tom’ (1960) featured a similar killer, and there had been psychosexual killers in films before, most notably Peter Lorre’s creepy child murderer in Fritz Lang’s expressionist German masterpiece ‘M’ (1931), Alfred Hitchcock’s vision of the savage Norman Bates became an iconic image of the serial killer next door. ‘Psycho’ set a precedent for slasher horror films that featured big knives, stylized gore, and sexual activity as a trigger for murder.

More suspenseful and less gory than splatter films, the slasher horror film emphasized the psychological origins of terror, with the deranged products of mental illness taking the place of old Hollywood monsters. An early example of this genre 70s horror film is Bob Clark’s Black Christmas (1974), in which sorority girls are picked off one by one by an unseen killer, but the masterpiece of the 1970’s slasher film is Halloween (1978) by John Carpenter. Made on a shoestring budget, it featured the classic elements of 70s horror; a mysterious killer, sexually active teenage victims, a psychological motivation for the killings, and single girl left standing to defeat the killer. When a Stranger Calls  (1979) was a similar release.

Splatter films also originated in the 1960’s, in low-budget exploitation drive-in fodder characterized by a fetishized emphasis on gore, most notably in ‘Blood Feast’ (1963). The splatter horror film is the gorier cousin of the slasher, and contains many similar elements, but the foremost feature of the splatter film is the use of technical special effects, sometimes sophisticated and sometimes cheap-looking, to simulate body mutilation. Wes Craven’s Last House on the Left (1972) was excoriated by critics, who found it tasteless, amoral, and badly made, yet its documentary feel and taboo-breaking content established cannibalism, female exploitation, a gang of marauding killers, revenge killing, and the survival of a lone girl as recurrent motifs that would persist throughout the 70s. These themes came together most notably in Tobe Hooper’s classic, The Texas Chainsaw Massacre (1974), in which a group of young people are systematically tortured and killed by a family of butcher-cannibals in a creepy old farmhouse.

Countless splatter horror films were released in the 1970’s, including Three on a Meathook (1972); The Hills Have Eyes (1977); I Spit on Your Grave (1978); and ‘Tourist Trap’ (1979). Horror director David Cronenberg took the splatter film to a different place, and in three films explored the horrors of the human body and its betrayal by forces beyond human control; Shivers (1975), Rabid (1977) and The Brood (1978). ‘It’s Alive’ (1974) and Dawn of the Dead (1978), George Romero’s sequel his subversive 1968 horror film ‘Night of the Living Dead’, are other typical examples of the 70s fascination with gore, although the latter may be more memorable for its satire of modern consumer culture, graphic disembowelments notwithstanding. 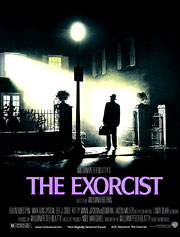 In addition, the occult horror film was also a popular genre in the 1970s. Major studios were more likely to finance these films because of hugely successful predecessors, like Roman Polanski’s ‘Rosemary’s Baby’ (1968). These films often featured big-name stars and higher production values. The most infamous of these, William Friedkin’s story of a young girl possessed by a demon, The Exorcist (1973), featured head-twisting special effects, sophisticated make-up and excellent sound techniques. Brian de Palma’s Carrie (1976) featured Sissy Spacek as an abused girl with telekinetic powers, and Hollywood legend Gregory Peck fought the Antichrist in The Omen (1976). The Amityville Horror (1979), the film version of the best-selling pulp novelization of one family’s allegedly true-life escape from a house haunted by demons, updated the haunted house story. Other entries in this genre include The Wicker Man (1973) and Audrey Rose (1977).

Film makers in other countries seized upon the horror film as well; in France Jean Rollin produced a series of erotic vampire films. The slasher / splatter horror genre was picked up as well, most importantly in Italy, where giallo films, a distinct genre rooted in pulp detective fiction, were prolific. Largely originating in the 1960’s films of Mario Bava, the most well-known products of this genre were those of Dario Argento, who employed vivid colors, unique set designs, intricately-staged death scenes, and the music of his electronic Goth band Goblin to create grotesquely beautiful horror films such as Deep Red (1976) and his masterpiece, the supernatural thriller Suspiria (1977). 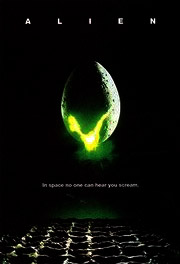 Despite the prevalence of slasher, splatter and occult horror films in the 1970’s, many of the decade’s releases remain difficult to categorize. For example, many analysts believe that the violence and social conflict created in America by the Vietnam war is a subtext of 1970’s horror, but the only film of the decade to deal with this overtly is ‘Deathdream’ (1972), by director Bob Clark, who also made ‘Children Shouldn’t Play With Dead Things’ the same year. In ‘Deathdream’, a dead American soldier returns from Vietnam as a zombie. Steven Spielberg revealed his mastery of suspense in ‘Duel’ (1975) and Jaws (1975).

The horror genre was so commercially successful in the 1970’s that it spawned blaxploitation versions of classics, such as Blackula (1972) and its sequels, and comedic spoofs like ‘The Rocky Horror Picture Show’ (1975) and ‘Love at First Bite’ (1979). Possibly the greatest horror film of the decade, Alien (1979), adapted many elements of all 70’s films, with ‘last girl alive’ Sigourney Weaver battling a terrifying alien creature rather than deranged human.

Regardless of content, production values or star power, 70’s horror films solidified the genre both as a commercial goldmine and a subject of critical analysis. Whether you read social commentary or political subtext in these films, or merely settle in to enjoy the terror, there is no doubt that these horror films set standards, proven by the persistence of their sequels and remakes.