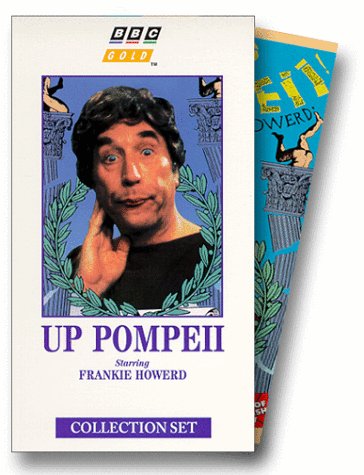 Review by Theo Robertson
Up Pompeii (1971)

Not A Great Example Of British Humour, 26 February 2005

This is the film version of a well remembered British Sitcom . I say well remembered and not classic because the nudge nudge wink wink unsophisticated humour had become very outdated by the 1980s . Compare UP POMPEII with BLACKADDER ( Notably the second series ) to see where I’m coming from.

Basing a film on a popular TV show can also lead to another problem : Make it similar to the original and it looks like a half hour episode stretched beyond a natural length – Change the format and characters are you’re watching something unrecognisable , something the film version of GEORGE AND MILDRED suffers from . As it stands this movie feels like an overlong half hour episode from the show which means the central plot ( An assassination bid ) lacks focus . It’s also British humour at its most unsophisticated with characters having names like Ammonia , Ludicrous Sextus, Scrubber and Erotica . Sad that no one thought up Biggus Dickus . There’s some T&A that the original BBC show wouldn’t have been able to get away with but apart from that there’s little of note

Review by John Chard
Overkilling Pompeii, down with the humour

Lurcio (Frankie Howerd) inadvertently becomes the owner of a scroll that bears all the names of Emperor Nero’s (Patrick Cargill) assassins. Cue desperate attempts by the conspirators to recover the scroll while Lurcio lurches from one bad situation to another. Oh and Vesuvius is rumbling threateningly in the background.

Up Pompeii was born out of the British television series of the same name than ran from 1969 to 1975. Anyone who is familiar with the Carry On series of films will know the name Talbot Rothwell. A writer of many of the Carry On movies, he also penned the first series of Up Pompeii, and also co-wrote the second series with Sid Colin . It is Colin who wrote the screenplay for this here big screen version of Up Pompeii. So the link to Carry On, as well as Howerd who starred in two of the better movies from that franchise, is evident as much as it is important for potential first time viewers. Up Pompeii isn’t any good, and this in spite of boasting the considerable talents of Howerd. It takes the Carry On formula of innuendo based farce and cram it for all it’s worth. The film literally is 90 minutes of Howerd manfully making double entendre in every sketch. Which was fine for the first 10 minutes, but no matter how much sexy flesh and double takes that are crow-barred into the Roman parody mix, the joke quickly wears thin. Thinner than the slimline plot I have to say.

Saying that it’s very British, and one for the Brits only, really doesn’t cut it as an excuse for such pointless one trick cinema. I’m a very proud Brit myself and consider myself something of a flag waver for the best of Carry On, but this film is desperately poor and only of interest to Howerd enthusiasts {me, kind of} or those that adore lovely ladies legs {me, definitely}. But you know what,? even the red blooded male in me was dulled by the bludgeoning nature of the script. Come the merciful end of the film I was ready to be thrown to the lions as well. Incredibly the film spawned two sequels, Up The Chastity Belt & Up The Front. Now that fact is far funnier than Up Pompeii actually was. “Guards, I’m ready to fight Elsa now”. 2/10