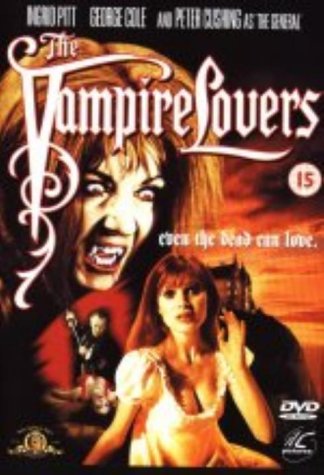 Who wouldn’t love these vampires??
Where would the horror field be if it weren’t for the legendary Hammer Studios? With their constant creativity and new variations on the general topic of vampirism they delivered some of the most important genre-films ever. Roy Ward Baker’s film the Vampire Lovers is one of the most essential movies Hammer ever released and it meant a landmark turning point for the sub-genre of bloodsuckers. Due to THIS film, vampirism afterwards always got immediately associated with eroticism and lust.

The Vampire Lovers influenced notorious directors like Jess Franco (Vampyros Lesbos, Les Avaleuses) or Jean Rollin (Lips of Blood, The Living Dead Girl) who practically made an entire career out of lesbian vampire movies. But this is the real thing! A stunning screenplay, based on a classic tale by Sheridan Le Fanu, solid acting performances and an atmospheric – almost dreamlike – photography. Ingrid Pitt plays the best, most memorable role of her career as the gypsy vampire Carmilla. Her sensual character seduces attractive young girls at the homes of prominent men where she’s at guest and turns them into weak, lifeless slaves. The worried men have to uncover the origin of this vampire wench in order to destroy her forever.

‘The Vampire Lovers’ offers a nearly perfect combination of atmosphere, beauty and tension. Mostly thanks to the female cast led by Ingrid Pitt, this is the most bewitching horror tale Hammer ever told. The ravishing naked bodies of Pitt, Madeline Smith (Theathre of Blood) and Kate O’Mara (Horror of Frankenstein) will give this film a spot in your memory forevermore. And that’s not a sexist remark; it just needs to be said. Other than the charismatic female appearances, this production also depends a lot on the eerie set pieces and the nightmarishly dark images of graveyards, ruins and castles. Overall, a splendid horror film and a must see for all fans of Hammer, vampirism or gorgeous beauties.

Has its moments…but not enough,
A (very) loose adaptation of the novella “Camilla”. Starts right off with a bang when a female vampire being beheaded but that’s about it for graphic violence. It’s basically about a beautiful lesbian vampire (Ingrid Pitt) who is going after every young attractive woman around. That’s about it for the plot.

I have (vague) recollections about seeing this at a drive-in when I was 8! I do remember Pitt attacking some men and a pretty mild (for now) lesbian sequence which had quite a reaction from my parents–my mother was disgusted, my father was enjoying it and I couldn’t figure out WHAT was going on! I figured they were just good friends. I remember liking it…but I was very young.

Seeing it now it does have its moments. There are some very erotic, beautifully filmed sequences. There’s next to no violence–this film was made for straight male men. There’s plenty of female nudity. Speaking as a gay man I found this pretty dull. It contains the same overly familiar Hammer sets found in all their other films and has a pretty vague plot (who IS that guy in black on the horse?). Also a beheading at the end is SO obviously fake. Peter Cushing is on hand to give another good performance and Pitt is very beautiful and is a pretty good actress–some of her expressions are priceless! And Jon Finch is handsome and hunky as the main hero.

All in all I was bored. The lesbian bits are tame by todays standards (I heard they were considered pretty extreme for 1970) and–unless you’re interested in lesbian vampires or pointless female nudity–this is pretty dull stuff. I give it a 3 for some of the acting and good direction–but I can’t recommend this