Voyage of the Damned

Voyage of the Damned – 1976
It lasted 30 days…You will remember it as long as you live. 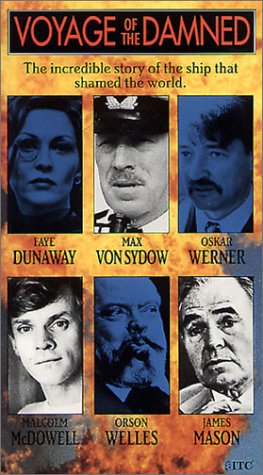 Voyage of the Damned (1976)
Too Much Of A Long Voyage,
This has all the feeling of a 1980s disaster movie with its big name all star cast . Alas British audiences will be distracted by the opening sequence where a cruel Nazi is played by the legendary Leonard Rossiter . These type of casting choices can sometimes ruin a movie and it’s not helped by having cameos by megastars like Orson Welles and James Mason in blink and you’ll miss them roles. That said the cast do seem more interested in giving good performances rather than enjoying themselves which isn’t always the case with movies with a large cast of big names. Special mention should go to Paul Koslo was very prolific in 1970s B movies and who appeared in some utterly pathetic movies in the 80s and 90s , while the always excellent Johnathan Pryce shows us what he can do in an early role . Max Von Sydow as Captain Schroeder gives the best performance in the movie.

All the cast do their best but it’s really the script that is at fault . I did mention Von Sydow’s acting performance as Schroeder , but you often feel his character is written as a litery point illustrating party member = bad , non party member = good , this point feels too forced and unsubtle . Remember it’s when people become indifferent that bad things happen , not when they join a political party . I don’t want to mention this but Erwin Rommel was a member of the Nazi party and he was the most respected German general by the allies because of his code of chilvary while many Wermacht non party members committed war crimes every bit as brutal as their SS counterparts so don’t be fooled that everything is as black and white as seen here , as the caption at the end shows Schroeder himself was questioned about crimes against humanity after the war.

There’s a couple of other flaws with the script . Aaron Pozner is shown being beaten to a pulp by some SA brownshirts in 1939 which is strange considering the SA were liquidated by Hitler in 1934 and lets be blunt in saying that the movie is at least half an hour too long . This is often a problem with a great number of movies featuring anti semitism 1933-45 in that by showing us mans inhumanity to man they often feel the need to labour the point home of the cruelty of the regime and the victims fear when in fact less would been more.