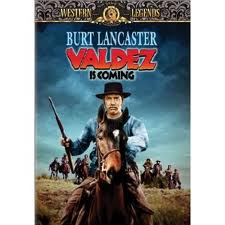 I would like to see Frank pay it.
Valdez is Coming is directed by Edward Sherin and adapted for the screen by Roland Kibbee and David Rayfiel from the novel of the same name written by Elmore Leonard. It stars Burt Lancaster, Susan Clark, Jon Cypher and Frank Silvera. Music is by Charles Gross and photography by Gábor Pogány. It’s out of United Artists and shot in DeLuxe colour. Plot finds Lancaster as ageing town constable Bob Valdez, who after being forced into killing an innocent man, attempts to get compensation for the dead man’s widow out of the townsfolk responsible for the events leading up to the shooting. This is met with a less than favourable response, particularly from crooked rancher Frank Tanner (Cypher), who although he is the most guilty party, takes umbrage to the suggestion and has Bob tied to a wooden cross and hounded out of town. But Bob will be back, he may be old and gentile in nature, but he’s an experienced Indian fighter and a crack shot marksman. Watch out, Valdez is Coming.

Solid if a little too ponderous at times, Valdez is Coming is sort of like an amalgamation of an American Oater and a Spaghetti Western. Filmed in southern Spain, at locations where master Italian director Sergio Leone shot many of his European Westerns, the film is the silver screen directing debut of Edward Sherin, who made his name as a director in American theatre and television. Whilst the direction is competent and the acting from Lancaster adds a complexity to the story, the picture almost seems to be trying too hard to make Leonard’s source material work. The bigotry of men card is played very early on and from then on in everything is just too predictable, in fact were it not for Lancaster’s screen presence the piece would fall well under average. The Christ-come-avenging angel motif is subtlety played by Lancaster, but tension is in short supply and action sequences few and far between. Somewhere in the cramped mix is a good film, one with something to say, a film desperately trying to make a dramatic thrust courtesy of a decent man on a mission narrative. Sadly it doesn’t all come together, but thanks to Lancaster and a neat ending, it’s not one to dismiss completely. 6/10

Footnote: British cuts of the film offer a version missing some violent moments, suffice to say that if seeking the film out one should choose carefully.