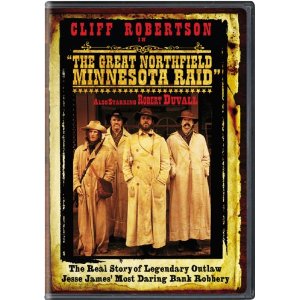 The Great Northfield Minnesota Raid is written and directed by Philip Kaufman and stars Cliff Robertson, Robert Duvall, Luke Askew and R.G. Armstrong. It’s a Technicolor production with Bruce Surtees the cinematographer and music is scored by Dave Grusin. Plot is based around the James-Younger gang’s infamous attempt at robbing the “biggest bank west of Mississippi” in Northfield, Minnesota, September 7th, 1876.

The Western done cinéma vérité by Philip Kaufman, very much leaning towards the “mud and rags” Oaters that were filing in post Sam Peckinpah’s Wild Bunch. Jesse James has provided the inspiration for a whole host of movies, with many of them having different interpretations on the man, the myth and his life. Kaufman dismantles the myth aspect and cloaks it in a sort of satirical grimness, flecking it with moments of crudeness whilst paying attention to history (the usual liberties aside) and the changing climate of the time. However, with Kaufman’s affection for comic book characters also comes the odd blending of tones, rendering the film an acquired taste. The narrative is strong, with the added bonus of the story continuing after the robbery, and Duvall gives Jesse James an energetic and bonkers makeover. But a safe recommendation to Western fans it is not.

I liked it enough, but not enough in that I could watch it again, but it would come as no surprise to me if it was some Western purists favourite Western. Roll the dice and take a chance, really. 6/10