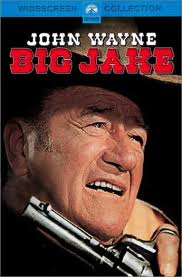 You follow him and I’ll hunt you down and kill yah.
Big Jake is directed by George Sherman and written by Harry and Rita Fink. It stars John Wayne, Richard Boone, Patrick Wayne, Christopher Mitchum and Maureen O’Hara. Elmer Berstein scores the music and William H. Clothier is the cinematographer. It’s shot in Panavision and Technicolor with the principal location for the shoot being Durango in Mexico. Plot finds Duke Wayne as tough old rancher/gunfighter Jake McCandles, who is estranged from his family and spends his days roaming the west with his trusty dog. However, when the McCandles family ranch is raided by a gang of outlaws led by John Fain (Boone), and Jake’s grandson Little Jake is kidnapped for ransom, Big Jake gets the call from his separated wife Martha (O’Hara) to go find the boy. Which he sets off to do, with two of his sons in tow.

There were many critics who felt John Wayne should have stopped making movies before the 1970’s arrived. Which is a bit ignorant considering he would bow out with the heartfelt and poignant The Shootist in 1976. It’s undeniable that of the ten 1970’s film’s he made before his death, half of them are disposable at best, Big Jake isn’t one of them. Yes, the formula is hardly new, only here the blood quota is considerably higher than previous Duke Wayne outings, and yes, tonally the film is a bit too up and down for its own good. But it’s a film that finds old hands Wayne and Boone turning in good shows and the action and thematic camaraderie on show more than compensates for the looming cloud of same old same old.

Of worth, too, is the time setting of the story, coming as it does towards the back end of the Old West, we get to see many examples of the Wild West being tamed. Be it the railroad, or motor driven vehicle’s, our protagonist and antagonist are old school characters framed by a changing West. This is where it pays to have Wayne and Boone in the main roles, turning it in in an old school, knowing, style. The names Clothier and Bernstein are synonymous with the Western genre, and they don’t disappoint here, both the photography and score treat the eyes and the ears. And although not in it for very long, O’Hara adds a touch of class in what was the last of the five times she appeared on film with her friend Duke Wayne. In amongst the violence there’s also plenty of fun, some intended courtesy of banter between Duke and his estranged sons, some not intended; such as watching the dog out act the siblings of Duke and Robert Mitchum! But all told, if you don’t expect The Searchers or Hondo et all, then this holds up as a good way to spend an afternoon. 7/10

Footnote: I wonder if John Carpenter watched and enjoyed this film so much he cribbed a reoccurring joke from it for Escape from New York? Big Jake keeps coming up against people who say that they thought he was dead, same thing happens to Snake Plissken in Carpenter’s picture. A homage I’m sure.