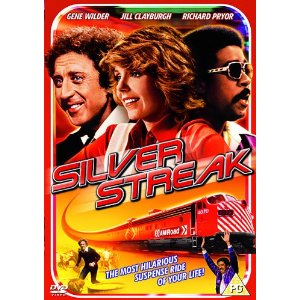 By plane, by train, by the edge of your seat…
Silver Streak is directed by Arthur Hiller and written by Colin Higgins. It stars Gene Wilder, Jill Clayburgh, Patrick McGoohan, Ned Beatty and Richard Pryor. Music is by Henry Mancini and cinematography by David M. Walsh. It is the first of four films that Wilder and Pryor would make together. Story finds Wilder as book editor George Caldwell, who upon boarding the Los Angeles to Chicago train finds himself mixed up with art forgers who are only too happy to commit murder to keep their dealings quiet. Fun, frolics and high speed danger will follow.

Amiable film that just about manages to blend Hitchcockian thriller values with silly comedy shenanigans; even throwing in a good old rousing disaster movie staple for the last quarter. Even though Pryor doesn’t feature until the halfway point in the piece, this is very much a film that succeeds due to the chemistry between himself and Wilder. Sure the action is well handled, and the other major players are performing well (McGoohan sinister/ Clayburgh sweet/Beatty ebullient), but it’s noticeable that the film considerably picks up on comedy value once Pryor enters the fray.

With that in mind, picture feels too long at just under 2 hours, but it’s never less than entertaining and was popular enough with cinema audiences to ensure Wilder and Pryor would go on to make the wonderful Stir Crazy 4 years later. 7/10