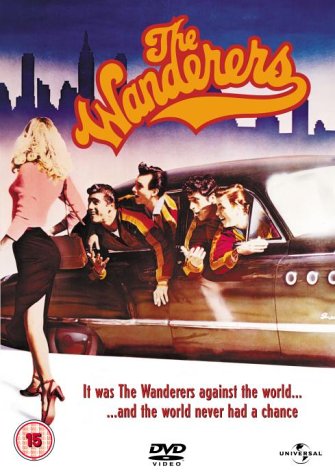 New York in 1963 and if you’re young you belong to a gang and if you’re Italian you belong to The Wanderers! A collection of kids caught up in love, friendship and pubescent fumbles. Interspersed in their lives are bitter clashes with rival gangs – more feared than the Baldies and their heavyweight leader Terror.

The Wanderers (1979)
Review by Wayne Malin

Excellent drama,
Story takes place in 1963 in the Bronx NY area. It deals with a gang of kids called the Wanderers and their coming of age. It focuses primarily on Perry, Joey (John Friedrich) and Richie (Ken Wahl). Richard Price’s novel was a short but horrifying view of that place and era. The movie retains the names of the characters but lightens the tone completely. There’s multiple stories going on and the movie is full of incredible sequences.

Highlights include: a classroom “discusion” about race; the Wanderers marching down an alley to the title tune; the Baldies revenge on Joey and Richie; a small role for the then unknown Olympia Dukakis; a game of “elbow tit”; Karen Allen’s introduction; a trip to Ducky Boys territory; a memorable party and football game; JFK’s assassination and a violent rumble.

All the acting is great but Wahl and Allen stand out. There’s exceptional direction by Philip Kaufman and excellent use of period music.Also nice to see Linda Manz and author Richard Price have small roles. Also noted comic book artist Neal Adams did the Wanderers poster at the football game. Some people should be warned–the violence is infrequent but strong and there’s tons of swearing and racial slurs.

I’ve seen this movie multiple times and every single time I find it fascinating. The direction, music, acting and stories just pull you right in. This movie never hit it big because of lousy distribution back in 1979 and the violence caused by another gang picture “The Warriors” limited its release. I remember theatres in Boston MA refused to play it! Still it has attained a deserved cult attention over the years.