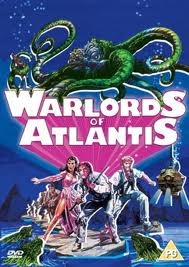 Warlords of Atlantis (1978)
Entertaining Despite The Flaws
!!!!! MILD SPOILERS !!!!! In my review of AT THE EARTH’S core I said that the best of these Doug McClure gets attacked by rubber monsters in a 1970s British movie was THE LAND THAT TIME FORGOT . If this holds true – And it’s been years since I saw that movie – then WARLORDS OF ATLANTIS is certainly the second best in the genre Written by former DOCTOR WHO script writer Brian Hayles the story has some imagination even though no one is going to confuse it with a documentary . An eclectic ship’s crew is abducted by a giant octopus and taken to the ancient city of Atlantis which is ruled by an alien civilisation which is engaged in a war of attrition against giant rubber monsters.

One of the abductees Professor Aitken is wanted by the aliens for his superior intellect while the others will be used as slaves . It also turns out the abductees must be converted into gill breathers within a few days if they are to survive their new environment . Naturally upon hearing this the ships crew don’t want to stay in their new home.

An entertaining enough story and unlike AT THE EARTHS CORE the production values are fairly good since location filming involving oceans and caves are used . There is the old bug bear of actors standing in front of obvious back projection trying to look scared at a rubber glove pocket but that’s not enough to ruin the movie , in fact that adds some charm and the script has the temerity to point out that mankind’s greatest achievements have come out of fighting one another in terrible wars.

There are one or two plot holes like why do the aliens consider Professor Aitken a man of superior intellect since he would have no understanding of space travel or Einstiens theory of relativity , in other words he’s a cave man compared to the aliens. You also can’t help but notice that when the characters escape Atlantis, Delphine the female lead, has been rather superfluous to the plot. However, these minor flaws are never enough to totally ruin the movie for a discerning audience.