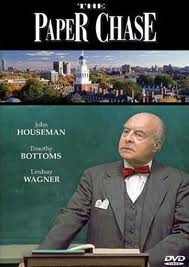 Pretty good but overrated by some,

This is a good film but wildly over praised. The script is very good, it’s well-directed and acted…but this tells me nothing more deep than other college movies. I always knew where this was going. Also the romance plot between Bottoms and Wagner is sort of ridiculous–no way would she fall for him. And Bottoms looks horrible with a 70s Afro and mustache. Still this is worth seeing.

It’s very well written and (partially) directed in Cambridge MA (where Havard Law School is) which really gives the film a good shot of realism. Also the acting is good by almost everybody except for Wagner. She’s very beautiful but lousy. Bottoms is just great but best of all is Houseman. He deservedly won a Best Supporting Actor Oscar for this role. This movie is just worth seeing for him. Also it was surprising to see how casually sex was treated in this picture–but this was long before AIDS came around.

So it is good and worth seeing–but no masterpiece.