The Possession of Joel Delaney

The Possession of Joel Delaney – 1972 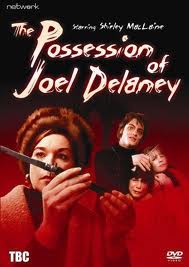 A man Joel Delaney (Perry King) becomes possessed by the spirit of an evil Puerto Rican man. His sister (Shirley MacLaine) tries to help him get rid of the demon.

Why do I hate this movie? Let me count the ways:

1) First off, the racism in this film is subtle…but it’s there. There’s a suggestion that King (whose character is rich) gets possessed because he hangs around with poor Puerto Rican people who are, by implication, evil and vicious.

3) This movie is very slow-moving–even the “shocking” discovery of a dead body was dull.

4) The direction seems off–like the director didn’t know where to point the camera.

5) The ending at the beach house was the most disgusting thing I’ve ever seen in my entire life. When movies lower themselves to child abuse I tune out. There’s no need for that sequence to be in the movie…I really wonder how the parents of the kids could have allowed this.

Dull, sick, racist…this film was understandably a bomb in 1972. I haven’t seen anyone “discovering” it lately either. Even MacLaine never talks about it. Avoid at ALL costs!