The Owl and The Pussycat 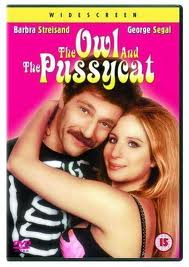 This movie is VERY loud (basically because Streisand yells nonstop), the humor is pretty caustic (Streisand thinks Segal is gay and throws quite a few homophobic jokes at him) and is pretty risqué–it was edited from an R rating but there’s still plenty of swearing and sexual sequences. Still it is fun. Segal and Streisand work well together–the script is full of one liners that they throw at each other full tilt. And it might seem strange that Streisand could convincingly play a prostitute–but she actually looks very attractive here and pulls it off (she played another one in “Nuts” in 1987).

This isn’t perfect however. It seems a little bit too long and some of their arguing gets repetitive. Also there is annoying edit when Streisand says the word “f***”. I’m guessing it was cut to get a PG rating but it renders one scene incomprehensible and I DID hear it in the video version released in the 1980s. What’s the story? Also there’s a very ugly scene at the end where Segal humiliates Streisand in Central Park. Segal also shot some nude scenes which never made it into the final print.

Still this is worth catching. I wouldn’t let the kids see it though. This is pretty strong for a PG film.