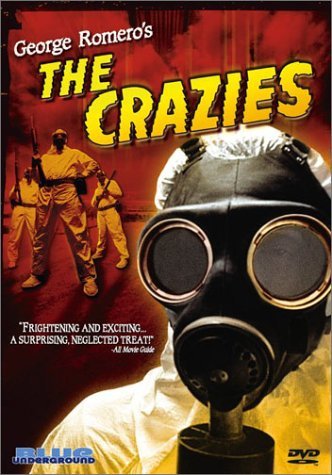 The Crazies may not be one of George A. Romero’s (screenwriter and director here) absolute best, but it shows what a film-making crew and dedicated character actors can do for such a seemingly big-budget film. The budget, it seems, was that of almost a Roger Corman film, just enough for the film, some dingy sets, to get no-name actors with big personalities, and cheap effects. Never-the-less, classics have come out of low-budgets, and this (albeit with a couple of flaws) is one of them. Another thing to note is that Romero is doing triple duty, as he did with many of his films up to Dawn of the Dead- he is also the editor, which is crucial for a film like this. A lot of times, there might be some continuity errors on the set, or there might be a shadow of a boom mike or other sort of goof. Luckily for the audience, Romero happens to be as superb an editor as he is at subversive, genre film-making, and many scenes come together- and become tenser- by his trademark style.

Sometimes, to fit the quasi anti-war and notably science fiction elements of the story, Romero has to get creative. Take example for a scene where in the midst of rapid-fire arguments between government officials and officers and doctors, someone offers the suggestion of dropping a bomb or calling the higher-ups for results. There are a couple of split-second montages of pilots manning the planes, flying up, targeting, etc. This is highly effective visually for a film without much of a budget- it’s almost reminiscent of what Kubrick did (though he did it in a slower, more deliberate-paced fashion) in Dr. Srangelove. In this whole sequence of officials bickering, half realism half satire, one gets the sense psychologically of what is to come.

That’s not to say The Crazies is all talk and no action, quite the opposite. In a sense this is almost like an un-official ‘living-dead’ picture, only this time Romero shows the whole thing from start to finish, how it starts, how it spreads, how the people start to change, and how a group of survivors try to stay on the run. Only this time, in a way, it’s even more terrifying, as a ‘Crazy’ is more unpredictable than a crude, instinct-driven zombie. Take the opening as a prime example, where there is just a pure shock as kids watch their father going completely nuts, and seeing two more tragedies quickly unfold. It sets up the rapid-fire set-pieces, some of which fairly disturbing (if a little cheesy, one of the film’s flaws). Another scene involving a priest is just as disturbing as the other, more of a sequence of images than a real ‘action’ scene. There’s a sense of terror in seeing how real everything is (and it is, it’s practically all location-shot), even as it does go a little, well, crazy after a while.

There is also a dependable cast, as I mentioned, who are either very good or too over-the-top. Three actors in particular are very good among some so-so performances from the heroes: Lynn Lowry (who had a sort of minor cult-career in her day) is genuinely creepy, especially during her downfall; Richard Liberty, who hammed it up in Day of the Dead, fills in a good gap as a worried father; Richard France, who made a memorable appearance in ‘Dawn’, plays it all for show as a level-headed, frustrated doctor. Most of these are un-professionals, of course, so what you see is what you get- many of them work, some of them don’t (the wife character, played by Lane Carroll, was mis-cast). But in the end, Romero puts together what he set out to do: it’s another work of apocalyptic experimenting, where the bio-hazard suit-men are likely to be as, if not more, dangerous than the infected, and curiosity for the sci-fi driven subject matter goes along with the suspense and shock-value. It’s certainly not for everyone, but for the drive-in fan in us all, it’s bound to keep you in your seat. A-

Has its moments,
A small town in Pennsylvania is accidentally infected with a virus the army has developed to use as a weapon. It causes its victims to go insane. The army arrives in town to contain the virus but its already infected some people…and things go barreling out of control.

OK Romero film–it was his first horror film after “Night of the Living Dead”. It isn’t as good as that…but how could it be? This is well-directed and has some nice bloody moments…but it doesn’t work too well. The basic problem is some of the writing and acting. Some of the dramatic scenes are pretty poorly written and some of the actors are really really BAD! Some are just OK–Will MacMillan (as David) and Richard France (as Dr. Watts) come off best. All in all its an OK time filler.

This was a commercial bomb when released although critics liked it. It finally got its audience on home video. I give it a 7.