The Cowboys – 1972
The youngest was nine. There wasn’t one of them over fifteen. At first, he couldn’t stand the sight of them. At last, he couldn’t take his eyes away. 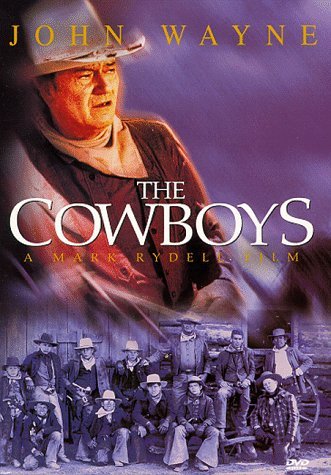 The Breaking of Boys and the Making of Men
The Cowboys is directed by Mark Rydell and adapted from the novel written by William Dale Jennings; who co-writes the screenplay with Irving Ravetch & Harriet Frank Jr. It stars John Wayne, Roscoe Lee Browne, Bruce Dern and Colleen Dewhurst. John Williams scores the music and Robert Surtees is the cinematographer. Plot sees Wayne as tough cattleman Wil Andersen, who after finding all his cowhands have fled to find their fortune elsewhere, is forced to use a bunch of green teenagers to get his beef to market. It’s a journey of some distinction, for Wil, the boys and the villains who lurk on the edges of the frame.

If ever there was a John Wayne picture that was in need of serious critical reevaluation, both as a measure of his acting ability-and quality in film narrative, then The Cowboys is the one. It’s a film that has been known to upset the liberal minded, where the ideology at its core has been lambasted as being objectionable in the least. Yet looking at it closely, away from the humour that does exist within, it finds the Duke at his most vulnerable, therefore believable, and at its centre it’s a coming of age tale told with cynical coldness. During this cattle drive innocence will be lost, Andersen is tough and a disciplinarian, yet he’s always a benevolent father figure. Wil himself hit the cattle drive trail at 13, he knows the pains and perils of such a task. He also knows that boys need to become men, especially out here in the wilderness. I’d be disappointed in a piece of Western genre cinema if it glossed over this fact. And The Cowboys doesn’t, it has a sting in its tail, the trick is that the boys are not judged by how Wil taught them, but defined by a turn of events that calls on them to “man” up. The actions of another being the catalyst for childhood’s ending.

Robert Surtees’ photography paints a beautiful picture, it’s pastoral, broad and appealing, but crucially it doesn’t make it poetic. These young lads are entering the unknown, each section of God’s great land is beautiful to us, but dangerous to them. It’s an overlooked point that critics of the film ignore, that of Wil Andersen not leading these boys on a romantic trip thru the colourful terrain. It’s not romantic, it’s dangerous, and it’s credit to Surtees that he achieves both sides of the coin; beauty and peril in the same frame. The young actors are, expectedly, a mixed bunch, but there’s nothing here to be overtly negative about. Roscoe Lee Browne is terrific, his shift from wry observationalist to “Mother Hen” is handled with great skill, and Bruce Dern is memorable in more ways than one. The complaints come from not enough screen time for Colleen Dewhurst, who playing a bordello madame positively threatens to send the film’s rating thru the roof (and the male viewers temperature’s), while the running time is simply too long-too episodic-and quite frankly, unnecessary.

The Cowboys is not a perceived John Wayne macho based fantasy movie, it has meaning, depth, bravery and a first class performance from the Duke himself. 8/10

The Cowboys (1972)
If You Don’t Like Westerns Then
…. You won’t like this movie
In many ways THE COWBOYS is very similar to THE CULPEPPER CATTLE COMPANY , both are westerns crossed genred with a rites of passage/coming of age story . But where as THE CULPEPPER CATTLE CO deconstructs myths THE COWBOYS is very much the traditional clichd western with a lot of wish fufillment thrown in
John Wayne plays The Duke and this time his name is Wil Anderson . It’s basically the same role he played since first appearing in movies . He’s full of White Anglo Saxon Protestant virtue but is very inclusive too . It doesn’t matter what race or age you are as long as you can steer cattle across the American wilderness you will have the undying respect from Mr Anderson – Yawn .

To be fair there’s something involving the plot that makes THE COWBOYS stick out from most of Wayne’s other movies . You’ll know what I’m talking about when you see it so I won’t spoil it for you , but at the end of the day it’s a movie with little appeal to audiences who aren’t all that keen on westerns . Bruce Dern is one slight saving grace as an evil villain with racist views but he’s slightly difficult to take seriously because he’s written in a melodramatic manner . Compare him to Geoffry Lewis and Bo Hopkins in THE CULPEPPER CATTLE CO and tell me who would terrify you most as a work colleague ?