The Creeping Flesh – 1973
A terrifying journey through the nightmare worlds of evil, insanity and terrible revenge. 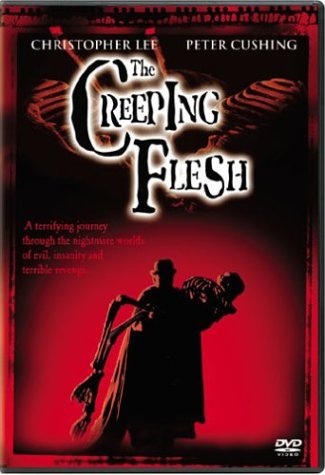 The Creeping Flesh (1973)
Lacks A Cohesive Story,
Like many a horror film broadcast on TV in the late 1970s THE CREEPING FLESH was a topic of conversation at school the next day with the gory scene of the man getting stabbed in the throat with all his veins hanging out being most memorable moment.

Unfortunately when I saw this movie again a couple of nights ago I became aware that THE CREEPING FLESH is composed of memorable moments and little else . The title sequence featuring a painting that resembles Salvador Dali`s worst nightmare is memorable , the man trapped under the coach in a rain storm sequence is memorable , as is the image of the shadow falling against the house , but despite all the imagery and memorable moments the movie lacks a cohesive story.

One reviewer mentioned Freud and watching the story play out as virginal and repressed Penelope evolve into an entirely different sultry creature it`s impossible not to notice some sort of Freudian sub-text . Alas this doesn`t seem to comprise of the bulk of the film and it`s impossible to work out what the bulk of the movie is about . Is it about the nature of evil ? What was the skeleton originally ? What were the skeleton`s plans ? You see if you stop to examine the movie in any great depth it ends up giving more questions than answers . I was also confused as to what how the scenario affected the 20th Century . Did the skeleton and Peter Cushing`s character experimenting on the essence of evil lead to world wars and genocides across the world ? If so then Nigel Kneale wrote a far better , more interesting and more cohesive story on human nature with QUATERMASS AND THE PIT.

Not to be totally negative THE CREEPING FLESH is an entertaining traditional British horror with Christopher Lee , Peter Cushing and a few women with large breasts and I have mentioned the rather impressive imagery . It is rather disappointing if you`ve seen it with an absence of 25 years ( The man getting stabbed in the throat is laughably ungory when viewed today ) but I`ll still give it 6 out of 10

Slow but interesting,
Kindly, absent-minded professor Emmanuel Hildren (Peter Cushing) brings home the skeleton of what he thinks was a prehistoric man. His evil brother James (Christopher Lee) runs an asylum. Things get complicated but by the end of the movie there are two maniacs and a monster running around loose!

This is a slow but OK horror movie. The script is kind of silly. Most of the first hour is all talk and the revelation of what the skeleton really is is absolutely ridiculous–but Cushing manages to put it through. It’s more of an old-fashioned horror movie than the blood and gore movies Hammer was putting out at the same time. The rating is PG and there are only two bloody (but tame) throat slashings. Also the look you get of the monster actually made me jump. I loved it the first time I saw it on TV (edited) back in the early 1980s but, unfortunately, it doesn’t hold up on a second viewing. The plot was a whopper. I could handle it the first time but the second time around I thought it was just dumb.

Good acting all around helps. Cushing and Lee (playing brothers!) are just great–but I think those two were incapable of giving a bad performance. Lorna Heilbron was also good as Cushing’s daughter Penelope. She has do a complete turnabout with her character halfway through the movie and she pulls it off.

Worth seeing for horror fans–especially people who like old-fashioned ones.