The Cat o Nine Tails (1971)
Il Gatto a nove code
Caught between the truth and a murderer’s hand! 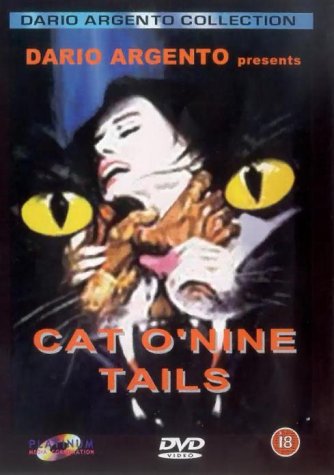 Clever giallo with style & substance,
Dario Argento’s second horror film (simultaneously the second entry in his animal-trilogy) is quite a stylish giallo, successfully blending grisly brutality with intelligent plotting. “The Cat O’ Nine Tails” actually delivers more than you normally expect from an Argento film as it contains several flawlessly elaborated suspense-sequences that can easily stand a comparison with Alfred Hitchcock’s best work, and no, that’s NOT giving it too much credit! The story involves a series of sadistic murders all connected with the management staff of a genetic research institute in the heart of Rome. The institute is doing some breakthrough work in linking a particular DNA structure to typical criminal-behavior and the risk for industrial espionage is high. The blind neighbor Franco Arno and his young niece Lori help journalist Carlo Giordani in his search for the murderer.

It’s pleasing to see how Argento clearly put more thought the plotting here than in his later, more famous, work. Even though the premise is very over-the-top and confusing, Argento makes efforts to cover every possible hole in the plot whereas – in his later work – he simply inserted more gore to distract your attention.

The camera-work is fantastic and guided by a solid Ennio Morricone score. Some of the highlights in “The Cat O’Nine Tails” include a shocking scene in a train-station (ouch!!), a cynically fun sequence at a barber’s place and – especially – a claustrophobic scene in a vault which almost causes you to distrust the one character of who you were certain that he was in the good camp… You’ll know what I mean by that when you see the film. It truly is a powerful scene. The symbolism sometimes is a little too heavy, though, and the film is slightly too long. But that’s just to name two minor flaws in an overall very good horror movie.

This is definitely one of Argento best films and it certainly is his most underrated one. Personally, I enjoyed it a lot more than “Profondo Rosso” which is more acclaimed but actually less intriguing. One more thing: make sure you’ve got your finger ready on the rewind-button during the very last sequence! The murderer’s deadfall is definitely something you’ll want to see in instant replay!