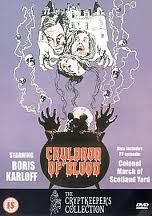 Boris Karloff, probably the greatest horror actor who ever lived, passed away in February 1969 and you can almost consider this a blessing since he didn’t had to experience the release of this movie that way. “Cauldron of Blood” is an awful 70’s Euro-trash production and Karloff-admirers shouldn’t remember like he looked here: an ill and crippled old man who had to star in inferior productions until his death. Like another reviewer around here cleverly pointed out, this film looks like it was edited together in bits and pieces and new footage was only shot when the makers had an extra nickel to spend.

Karloff stars as the blind sculptor Badulescu who isn’t aware that his fiendish wife and her masked lover provide him with murder victims to use as armatures for his artwork. Their idea is to get rich real quick but the whole plan threatens to get revealed when a reporter arrives in the seaside town with the idea to attract more tourists by making a publicity campaign about Badulescu’s work. The basic premise is promising enough (it even reminds me a little of “House of Wax”) but the execution is too incompetent for words.

“Cauldron of Blood” is barely watchable, with entire sequences that seem to be missing and the camera that freeze-frames every time something terrible is about to happen to one of the characters. This could have been an exhilarating movie (and a worthy closure to Boris Karloff’s career) but it turned out an unendurable mess, instead.