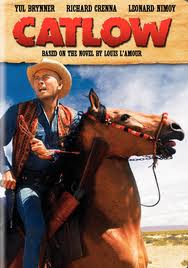 This decent but little known comedy-western is all about acting! Especially Yul Brunner has the time of his life portraying a smooth cattle-thief who just promoted himself to gold-robber. His name is Catlow and he rides through the Texan desert with his gang of thugs, chased by Sheriff Richard Crenna (the two are buddies even though they ought to be enemies) and hired hit man Leonard Nimoy. Everybody – Catlow as well as his pursuers – encounters trouble on their ways, such as aggressive Indians, sneaky Mexican villains and deadly ladies.

The script of this film (which I believe was filmed in Spain, like many contemporary westerns) isn’t very special and lacks coherence. Sam Wanamaker’s direction is very hammy and it looks like though the cast is pretty much doing what they feel like. Still, it often is enormous fun to see the comic interactions between Brunner and Crenna when they’re trying to outsmart each other with lists and dialogues. Leonard Nimoy is terrific as well, but unfortunately he has little screen time. The beautiful camera-work and exhilarating Country & Western music make you regret that the story is so weak.