Psychomania – 1971
Ride with the Living Dead! 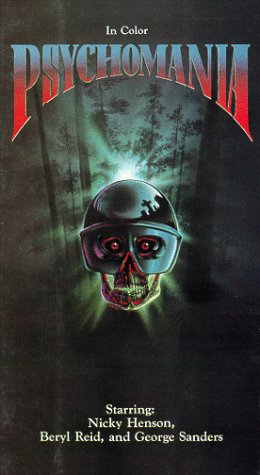 Rubbish But Entertaining Rubbish,
I remember seeing PSYCHOMANIA as a child when it was broadcast one Friday night many years ago and I also remember liking it very much. Having just seen it again minutes ago I’ve come to the conclusion that it’s a ridiculous movie but it still remains a very likeable movie.

Yes it’s total and absolute rubbish with a plot that doesn’t bare scrutiny, some totally unconvincing performances by actors who’d be at home on some provincial stage, lines that will have you laughing out loud complete with some cheesy folk and rock muzak but that’s the whole point of why I found this movie an entertaining experience.

I could remember much of the dialogue and scenes from my childhood and after seeing them again they’re just as I remember them, scenes like the policeman asking the guitar playing tearaway to ” Come down here ” and the bit where the cops hide in the mortuary with the camera turning 360 degrees to show … ah but that would be telling.

If I have a problem with the movie it’s down to the fact that the script is a little thread bare and very uncomplicated which means it’s not a movie you can watch over and over again, and it should be pointed out the ending is a bit of a cop out but if I had the choice of watching this to a prize winning art house flick I’d watch PSYCHOMANIA every time.