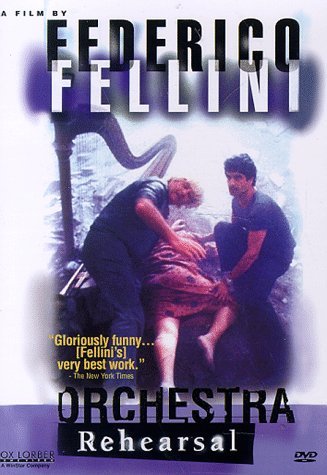 Prova d’orchestra (1978)
the Orchestra as a microcosm of society, or a small Fellini exercise, you decide- I think it’s both,

In most of Federico Fellini’s best films, he made big statements about the way we live and socialize with each other and deal with ourselves as much as the past, all within exciting, tragic-comic film-making style.

Orchestra Rehearsal does the same, though in a shorter amount of time. We are given a (union) orchestra in Italy, who’s members vary from young adults to the old timers, women, introverts, trouble makers, and so forth, who each have their own music of choice (or sometimes of necessity). The conductor is frustrated- he can barely get the orchestra to concentrate much less really practice, and the union problems get things caught in the way as they rip through the ironically happy and (typically) carnival-like pieces.

There’s a break taken, which is when everything starts to slowly, but surely, wind down and breakdown among the musicians. In the meantime a television crew stands by taking ‘interviews’ of the musicians, their opinions, their little ‘off’ moments, signaling the anarchy that will soon ensue.

The interviews themselves are some of the strongest, funniest parts of the film- the interviewers get (sometimes begrudgingly) words on their instruments, why they play, how they play, and what role their music has in the world. These interviews can also be hit-or-miss sometimes, and because of the constant dialog (there’s sometimes barely a breath to be had, as is the beautiful claustrophobic style in Fellini’s characters), there’s almost too much information going on. There’s also the tendency for the character(s), whom are mostly portrayed by un-professionals (to acting, not to music of course), to not be very convincing, or even a little boring (the conductor’s monologue in his room, for example, is one of the weaker parts of the film for me). But then it does start to pick up in insane, trademark Fellini fashion as the musicians rebel, and an unexpected surprise comes heading their way.

It’s likely that Orchestra Rehearsal isn’t one of Fellini’s very best films, but it is one that captivates as it bemuses, brings laughs as it does thought, and it isn’t necessarily a wasteful experience (some may not like it much at all, at least in comparison to his masterpieces). Not to forget the incalculable, lasting power of Nina Rota’s music, which drives the film’s bombastic, heart-racing rehearsing scenes (there is also humor underneath much of the music, like when the musicians have their own little solos as jokes).

There’s something always satisfying when a composer is on the same page as the director he’s writing for, and few were ever so in tune as Fellini and Rota. And even during some parts that don’t add up, their combination helps out a lot. As mentioned before, one could even think deeper into the ideas and thoughts and characters in the film as almost a microcosm of society itself, its easy-going people, its hard-nosed people, its incendiaries, its nostalgics, and its normals and eccentrics. Or, one can just take the Fellini ride, so to speak, and enjoy some 70 minutes with Fellini & company.

A short pseudo-documentary about an orchestra rehearsing in an old church. I like the pieces where the various musicians speak about how their individual instruments have their places in the mix. But then there’s this odd and poorly developed stuff about the orchestra hating their conductor, from whom they eventually rebel. The film falls into an uninteresting anarchy.

The only reason the film is worth watching is because of Nino Rota’s score, his last for Fellini (he died in April of 1979, 8 days before I was born, incidentally). 6/10.