Magnum Force – 1973
Clint Eastwood is back in ‘Full Force’ as Dirty Harry in “Magnum Force.” 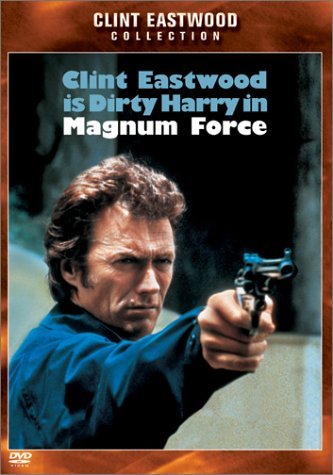 Magnum Force (1973)
“I hate the damn system, but until someone comes along with changes that make sense, I’ll stick with it.”,

I think this sentence, said at a pivotal point in Magnum Force, the second Dirty Harry picture, is one that should get more attention. It says something very basic about Inspector Harry Callahan, and in a sense about the society he’s fighting/serving. He has no qualms about putting a bullet right between the eyes of anyone with a pistol meaning business (in this case there are a couple of juicy examples, like early on with a hijacked airplane). But there is a line that he just can’t, and won’t cross.

This is something that I think has some reflection in our world from then and today; many of us get (usually rightfully so) indignation about the criminals of the world who seem to get away with abhorrent, or just plain wrong, crimes. Dirty Harry (Clint Eastwood, still one of his great characters) has become a kind of masculine, hard-as-nails (and as Pauline Kael calls pretty much ‘fascist) hero for the period, because he tries to get above the law, while still within its perturbing limits. The other line “a man’s got to know his limitations,” is also potent, though more of a throwaway to the ‘do I feel lucky’ speech from the first one.

It’s themes like these, from a script by John Milius and Michael Cimino, that give the audience something to sort of think about even as the more standard elements of the story run through. This time Harry has to contend with mysterious lot of killings in San Francisco; a corruptible politician and a pimp being two such targets. He also has things on the side with his personal life, but soon the case is taking over for him.

There is also the contemptible, and shady, Lieutentant (Hal Holbrook, with a couple of subtleties that work better than expected through the hard-faced scenes), who couldn’t care less about Callahan. Amid this there’s at least a couple of car chases, shoot-outs, the plane hijacking mentioned before (a highlight), and a supermarket robbery. For those who are gun nuts, some of these scenes will likely be eye-candy.

However, compared to the first film and even some of the subsequent sequels, the direction is hit or miss; some shots are creative, but its mostly pretty straightforward (although Eastwood was reported as uncredited as director, it just doesn’t pack the wallop Siegel’s direction had). And the scenes involving Harry’s personal life (i.e. women) aren’t very well developed; they’re just sort of left hanging as the film focuses on the main plot, even if they’re good scenes.

Still, through all of this, the ideas working through the story and the script help push it forward to a rewarding and exciting climax. There is a statement being made through all the action and hard talk. And there’s that trademark jazz score too.

Interesting plot–a bunch of cops take the law into their own hands and execute those they think deserve it. Good thing Harry Callahan (Clint Eastwood) is on hand to stop them. The original “Dirty Harry” had its problems–it was stupid, sadistic and sexist. But it moved quickly and was never dull. This one isn’t stupid but it’s VERY cruel (the murder of a hooker is particularly sick), sexist (not one positive female character at all and when the hooker is killed, it’s shot to turn on the men in the audience) and moves way too slowly and is too long (at least 20 minutes too long).

We get a hijacking sequence and a gun shootout contest which are not needed and bring the film to a screeching halt. Also the extreme violence (car chases, crashes and lots of bloody gunfights) is curiously unexciting. The only fun here is seeing Eastwood and unknowns Tim Matheson, David Soul and Suzanne Somers (blink and you’ll miss her) so young and full of energy. Also, the acting is pretty bad…especially Hal Holbrook who walks through his role.