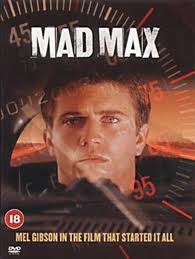 A quarter of a century on now (from the original filming) and still an icon of Aussie movie making!
It was the very rawness and budgetary constraints of this little flick that made it what it was. A new kind of action hero in a new kind of world! Gibson’s laughably underpaid (though unavoidably so) contribution cannot be underestimated. He imbued Max with more than the script actually merited. An attitude perhaps that struck a chord with many office-desk (wannabe) vigilantes. After all, Max takes control of his own life – is not cowed by authority. Max is everyman, the one inside us that few get the chance to let loose. He is part Jesus, part Che, part James Dean, all Australian yobbo! But this guy gets the job done.

Raw energy is what MAD MAX was all about! Distilled, tempered and inflamed by the time THE ROAD WARRIOR came around but at this juncture. a man on a mission and with the best tricked-up car since….well, THE CAR ! For those of you incidentally, totally mortified that his glorious black-hearted Interceptor was rendered dead-meat in MAD MAX 2, be comforted by the fact that it DOES in fact reside still in a museum in London (Why there and not Sydney I know not…perhaps for the same reason Australia still is not host to the cricket-ashes urn!) What chance of either’s return when Greece can’t even get the Elgin Marbles back?

Much has been made (and remembered) of the high-power car chases in this film, held by many in absolute reverence. In fact after the main cops vs The Nightrider work-out in the first few minutes of the flick, its pretty much all downhill in the action stakes – nothing subsequently in MAD MAX (1) comes near this brief sequence. This situation (with a way bigger budget) was inarguably reversed by the time THE ROAD WARRIOR came along. The stunts in THAT film have never been surpassed and remember this was without CGI fx.

MAD MAX has that indefinable ‘something” the sequels didn’t…perhaps just a raw innovation couldn’t be duplicated – rather like ur first kiss. It might not have been the best, but it sure IS fondly remembered.