Nashville – 1975
The Home of Country Music 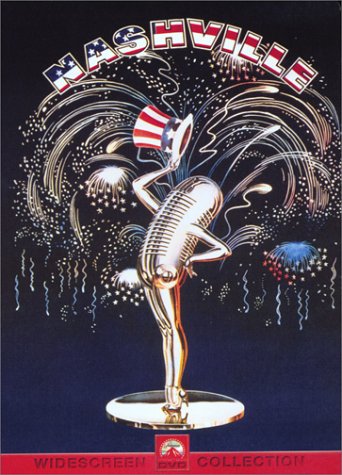 The opening shot of “Nashville” shows a van with a loudspeaker offering platitudes from Hal Phillip Walker, Replacement Party candidate for President and the perfect middleman for the movie “Nashville,” which like the never-seen candidate offers a series of apparently disconnected vignettes that touch on deeper truths but remain enigmatic and yet, somehow, substantial and truthful.

“Nashville” is the kind of film scholars champion and no one else watches, which is a shame because it has a lot to offer, and not just to pointyheads. I avoided it for years because of Pauline Kael’s iconographic reviews in the New Yorker. If she liked it so much, it couldn’t be that good. It was a film where Eastern intellectuals took their shots at country yokels like so many fish in a barrel. Boy, was I wrong.

“Nashville” is an empathic, genuine-feeling soap opera set to country & western music, the kind they used to play before Faith Hill and the Dixie Chicks revamped Nashville into Hollywood East. The movie takes a while to get started, and viewers are required to stick with a seemingly random group of characters with the most tangential series of relationships to one another. Over time, however, the vignettes gel into a mosaic of related setpieces that seem to move in tandem, until by the end, they gain a sort of terminal velocity that feels almost like destiny.

The nice thing about “Nashville,” actually the great thing about it, is how we see these people in such depth and richness. Haven Hamilton opens the film as a petty dictator of sorts, running his recording studio like a rhinestone Hitler as his eyes flash and roll for signs of petty trespass, but we grow to like his hokey showmanship and his genuine impulse to entertain and, at the end, see to it Nashville does not disintegrate into another Dallas. He’s not a bad guy, he just has bad moments, and virtually the same can be said of nearly everyone in this film.

Is “Nashville” a political film? There’s Hal Phillip Walker, and a final act of political assassination, but it seems more cultural. Certainly it’s not topical, though a Washington outsider did win the Presidency in 1976. We aren’t really encouraged to take Walker too seriously, not with those wild-eyed Walker girls waving placards with their frosted Manson-girl gazes. Is it a satire of Nashville, or Middle America? It’s far more brutal when it takes on the smarmy Triplette, or the transatlantic twit Opal, who seem the most contemptuous of Southern values. Talk about not having a clue.

By the second half of the film, we are locked into all the personal dramas and moments of revelation, to the point we feel them more than the characters themselves. Like Linnea’s moment of truth at a dive when Keith Carradine’s Tom sings “I’m Easy” as a desperate come-on to her, while three other women think wrongly it is being sung to them and react in varying degrees of smugness. Tomlin can’t sing gospel, and she’s not as funny as she was in “Laugh In,” but her reaction to his performance in that scene fully merited her Oscar nomination. Her eyes are Garbo-inert, and her head seems stapled to the wall as she wishes with all her heart this cup will pass her by.

I wouldn’t say that’s my favorite scene. It keeps changing with every viewing. I really reacted strongly to Barbara Harris’s culminating performance of “It Don’t Worry Me” after watching the film for the first time just after 9/11, though it does seem a trifle more apathetic than defiant upon reflection. Still, it has incredible power, because it’s sarcastic, hopeful, and revelatory all at once. It’s also a perfect note with which to end a rare film that manages to skewer and honor its subject simultaneously, yet ultimately manages to find the redeeming goodness in the blackest night.

Robert Altman is an extremely divisive director in the sense that you either “get it” or you don’t–and those who don’t despise his work and take considerable pleasure in sneering at NASHVILLE in particular. But there is no way around the fact that it is an important film, a highly influential film, to most Altman fans his finest films, and to most series critics quite possibly the single finest film made during the whole of the 1970s.

According to the movie trailer available on the DVD release, NASHVILLE is “the damnedest thing you ever saw”–and a truer thing was never said, for it is one of those rare film that completely defies description. On one level, the film follows the lives of some twenty characters over the course of several days leading up to a political rally, lives that collide or don’t collide, that have moments of success and failure, and which in the process explore the hypocrisy that we try to sweep away under the rug of American culture. If it were merely that, the film would be so much soap-opera, but it goes quite a bit further: it juxtaposes its observations with images of American patriotism and politics at their most vulgar, and in the process it makes an incredibly funny, incredibly sad, and remarkably savage statement on the superficial values that plague our society.

What most viewers find difficult about NASHVILLE–and about many Altman films–is his refusal to direct our attention within any single scene. Conversations and plot directions overlap with each other, and so much goes on in every scene that you are constantly forced to decide what you will pay attention to and what you will ignore. The result is a film that goes in a hundred different directions with a thousand different meanings, and it would be safe to say that every person who sees it will see a different film.

In the end, however, all these roads lead to Rome, or in this case to the Roman coliseum of American politics, where fame is gained or lost in the wake of violence, where the strong consume the weak without any real personal malice, and where the current political star is only as good as press agent’s presentation. For those willing and able to dive into the complex web of life it presents, Altman’s masterpiece will be an endlessly fascinating mirror in which we see the energy of life itself scattered, gathered, and reflected back to us. A masterpiece that bears repeated viewings much in the same way that a great novel bears repeated readings.

Brilliant. Altman manages to make an almost 3 hour film about 23 or so characters in Nashville over the course of 5 days. I almost didn’t see the film because I hate country music, but I decided to give it a chance. I ended up loving it!

The music wasn’t bad at all (“I’m Easy” won Best Original Song at the Oscars) and the songs seem to be making fun of themselves (Karen Black and Henry Gibson at the Grand Ole Opry especially). All the acting is good, direction is (of course) superb and the film is never boring.

If you asked me what this movie means, what the point is, etc etc I couldn’t tell you. All I can say is I’ve seen it at least 20 times and I’ve been blown away each and every time. If at all possible see this on a wide screen (like I do, at a revival theatre) or letterboxed. That’s the only way to see it–the full screen version on TV is unwatchable.