Empire of the Ants

Empire of the Ants – 1977
For they shall inherit the earth… sooner than you think! 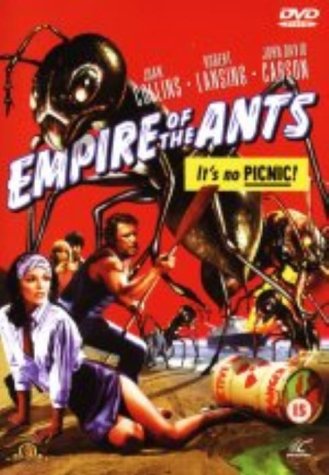 An eminent intro with a neat voice-over makes us aware that ants actually are as sophisticated as humans (if not more sophisticated). This is the perfect introduction to one of the most grotesque creature-features ever unleashed upon horror cinema. Bert Gordon’s Empire of the Ants, ladies and gentlemen! In this story, supposedly adapted from an H.G. Well’s tale, the ravishing Joan Collins stars as a fancy estate agent who tries to sell island properties to a bunch of phonies pretending they have money.

The joy is barbarically interrupted by a colony of humongous ants! The monstrous bugs have mutated into unearthly beings due to toxic waste (figures…). EofA is often categorized as one the worst 70’s shlockfests, partly because it’s from the hand of Gordon. But try to look at it as pure fun and cult entertainment that doesn’t require brain activity. It’s a troop of hairy, over-sized and – especially – cheaply created ants eating people one by one. Nothing more, nothing less. Still, the island location is eerie and the sound effects are more or less decent.

Joan Collins, one of my personal favorite actresses, is great as the bitchy broad. The rest of the cast are stereotypes, like the loser turned hero, the old wise guy the egocentric coward (who nearly always dies spectacularly) and the cute babe. I hardly consider the overuse of all these clichés to be obstacles since I never expected to see a masterpiece to begin with. The only real crap elements are the weak dialogs and the complete lack of atmosphere and tension.

Empire of the Ants does feature a brilliant, typical B-movie twist near the end, though. But that’s just my opinion and I’m sure that most people will find it too stupid for words. Nevertheless, Empire of the Ants is a must-see if you’re in to “big bug”-movies. This sub-genre of horror is going through a revival these days and it’s essential to watch the influential gems that once started it all.