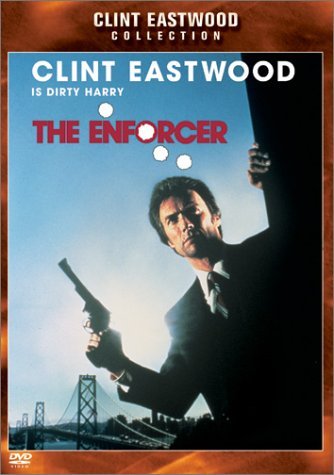 not as subject-heavy or thematically engaging as the first two, still as entertaining,
It’s hard to call The Enforcer the best of the Dirty Harry pictures, but it isn’t a disappointment at all; the quotable lines are still there (this time the repeatable line is “marvelous”), the chases, the the male-driven humor, the (slight) political undertones, and the notion that the hero will get his man (men/women).

This time Harry is partnered with a rookie female cop (Tyne Daley, good in some scenes and in some a little aloof), and with the time given in the film not much is explored with this kind of idea. It’s good that not too much is weighing the film down with the ‘radical’ idea that a woman can be a partner with a cop from homicide, and in a way it sort of matches up with the less weight given to the plot-line involving the ‘Liberation-front’ group as the film’s villains. Both could’ve been developed more in some ways, though on the other hand at an hour and a half it makes the film tight, even when some scenes feel a little looser than they should.

A highlight for me, and one of the great sequences in any Dirty Harry film, is Harry’s roofs-top/alley chase of a suspicious man. The expectable 70’s ‘action’ music is there, but not distracting, and there are enough surprises to bring a few big laughs among the general excitement of it. The climax to the film, in a way, isn’t quite as exciting, it gives what we expect and not too much more (aside from a very unusual and cool weapon used by Harry at the bad-guys). While it’s been a few years since I’ve seen the Dead Pool or Sudden Impact, this feels to be generally more of the ‘Hollywood’ Dirty Harry film, with Eastwood giving no more or less than his usual, and the story having just enough meat to keep one watching.

Nothing great, but nothing too shabby either.