Cries and Whispers – 1972
A haunting and shattering film experience 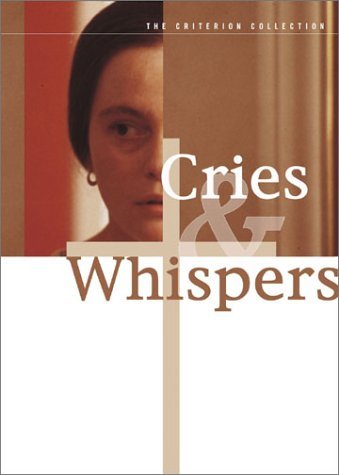 One of Bergman’s Most Powerful Works,

Upon its release CRIES AND WHISPERS was hailed as one of Bergman’s finest films. Although it has not quite held onto that original evaluation, it remains a very fine film–a subtle and delicately performed drama as remarkable for its silence as for its occasional moments of dialogue. And in many respects it offers an extremely good introduction to Bergman’s work.

Like many of Bergman’s films, CRIES AND WHISPERS shows the director’s preoccupations with memory, communication, time, community, and death. The story is bleak: Agnes is dying and her sisters Karin and Maria have come to attend her during this final illness–but they prove unable to communicate in a meaningful way with either Agnes or each other, and Agnes’ emotional care is left largely to her long-time maid, the devoted Anna.

As the film unwinds, we are bought into the memories of each woman in turn. The dying Agnes (played with powerful realism by Harriet Andersson) not only grapples with increasing pain, she recalls with regret the emotional separation that existed between her long-dead mother and herself. Sister Maria (Liv Ullman), a mindless sensualist, recalls an act of adultery that has poisoned her marriage; Sister Karin (Ingrid Thulin), who is emotionally cold, recalls an act of self-mutilation designed to thwart her husband’s desires. Only the maid Anna (Kari Sylwan), with a peasant’s directness, actually works to be of comfort, even going so far as to cradle Agnes’ head on her naked breast and dreaming of comforting Agnes while her sisters fail.

The film is ever so delicately tinged with subtle elements of lesbianism, sadomasochism, and incest, and the emotional problems experienced by Maria and Karin are at least partly sexual in nature–but these are not the focus of the film so much as they are surface indications of a deeper internal turmoil. As to what that deeper turmoil is… Bergman might say it is the nature of life itself. We each stand alone, usually in denial of our own mortality, usually unable to reach each other in any meaningful way. A deep film, and in spite of its occasional awkwardness a memorable and touching film. Recommended.

One of Ingmar Bergman’s most personal statements, one of his best,

Cries and Whispers is a film that will strike at least one chord with any viewer on its emotional placement, the almost unflinching (and absolutely masterful) camera technique by Sven Nykvist, and with the characterizations from the four female leads, inparticular the dying Ullman. This is also a film that will be very hard to stomach for most (it was at times for me), with it’s sheer display of constant dispair and grief, and the overall state of mind these characters hold. Ullman plays Agnes, marked with Tuberculosis, she lays on her death bed like a zombie writhing in pain for the eventual end, with her two sisters, Maria and Karin, and the servent Anna, at her bedside, though seeming at a distance (except for Anna). Bergman also views Maria and Karin’s relationships with themselves and their husbands, both rather brutal (Karin has a scene with a shard of glass that had me gasp). The examination of these roles, and the entire feel of the house, which is always shown as red as blood, make this in the realm of cinematic drama a shocker, and a masterwork to be certain.

There’s only one aspect of the film that I can criticize: many times in the film Bergman uses a red screen to fade in and fade out, and then again a few seconds later, and this seems to have not much purpose to the symbolic impact since the inside of the house conveys enough that these people are in a metaphorical house of hell already, and the fadings don’t add any weight to it. A+

The silence of a Bergman film can tear the flesh right from your body,

Ingmar Bergman makes the sorts of intellectually challenging films that are almost not allowed anymore. The younger generation is basically taught that the sorts of profound questions that Bergman asks (and Bergman more than any other auteur, for even the most highly respected auteurs, Truffaut, Fellini, Kurosawa, Kubrick, shied away from subjects such as Bergman has tackled) are unnecessary. They are taught this because, if they were to willingly examine the emptiness of human existence, they would quickly fail to participate in all the lovely shadows on the cave wall, and then society would go kaput.

Truthfully, I have not seen all that many Ingmar Bergman films. This shocked me, too, as I realized this. Before I came to college, I rented his most famous film, The Seventh Seal. Even the uneducated realize upon seeing it that it is one of the best films ever made. Next, probably the next week after I saw The Seventh Seal, I rented his second most famous film: Wild Strawberries. At the time, I did not find it all that interesting. It has been four years since I saw it, and I know I should rent it again, but I remember that I was sure that I understood it when it was over, and that its profundity was slight in comparison with The Seventh Seal. Like I said, I need to see it again. It was some three years later that I saw another Bergman film, Through the Glass Darkly. I was stunned at it, as I was at The Seventh Seal, even if slightly less. And then I saw maybe the greatest film that I ever saw, and it was one of his: Persona, the film that has haunted me for months now.

And now comes my fifth Bergman experience: Cries and Whispers. At first, I found it sort of slow, but that did not last for long. Without even realizing it, at about the half-hour point, I was so drawn in that I was experiencing the same pain as was being experienced by the four main characters onscreen. This is a devastating film. Its silence hurts terribly. And sometimes subtle sound effects scrape across your skin like a fork: the clock especially. Also, the whispers, which turn up as the film has faded out and is fading back in. I know for a fact that Criterion is doing a DVD version of this film, and that is great. On a VHS tape, the static is so loud as to drown out the subtleties on the soundtrack. And then there are the cries, which made me want to cry aloud along with the characters. All in all, my understanding of this completely exhilarating and painful film are weak. But in this lies the greatness of such a film that challenges my intellect. I must think hard about this, reading up on it, and hopefully seeing it again. I do not at all mind having to do this. It is much better than the escapism of an everyday film.

And if you are reading this comment because you love this movie, may I suggest Woody Allen’s Hannah and Her Sisters, which was obviously inspired by this film. It is not as great, for it is lighter, but it is a worthwhile followup to the film. Also, William Faulkner’s novel As I Lay Dying, which has a somewhat similar plot. It is about a family’s relationship as concerns their dead mother.