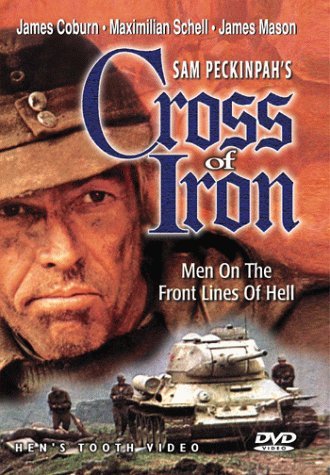 Underrated Classic,
When Nazi Germany invaded The Soviet Union in 1941 it led to the worst carnage in human history. From June 1941 to the final battle of Berlin in April 1945 the conflict between the Nazis and red army cost the lives of 35 million people. IF you look upon the war between Hitler and Stalin as being separate from all the other campaigns of conflict in the Second World War then the campaign in Eastern Europe is the bloodiest conflict in the history of mankind. Something that seems very unlikely to be exceeded. Alas however western filmmakers seem reluctant to acknowledge this. Off the top of my head I can think of only 3 American / European movies to be set on the Eastern front: ENEMY AT THE GATES, STALINGRAD and CROSS OF IRON.

I first saw CROSS OF IRON in 1983 and have seen it umpteen times since then. This is an intelligent anti war classic and I never get bored with it. James Coburn, star of many a forgettable lightweight caper movie is perfect as the cynical Sgt Steiner. For the first time in his career he shows he has presence and probably gives his best performance in any film. James Mason is also good, though you have to admit has Mason ever been bad? But the best performance award goes to Maximillian Schell as the villain of the piece. It`d be all too easy to have Schell as a goose-stepping Nazi, but Schell’s character is a Prussian aristocrat opposed to fascist egalitarianism. He dislikes the Nazis almost as much as Steiner does.

That’s one of many good aspects of the script, it’s so thoughtful and with one exception it doesn’t show any of the Germans as out and out ideologue fascists. But notice the couple of ironic touches in the film where people say the excuse of ” I obey orders. It was none of my doing. I was not responsible ” Something that has been said a lot of times during the last century, and the century before that, and the one before that. Guess if you travelled a thousand years` in the future we’d still be hearing that. I also find the script perfectly paced, CROSS OF IRON lasts nearly two and a half hours but no matter how many times I watch it I never find it dragging in any way. I sometimes watch SAVING PRIVATE RYAN but I only watch the first half hour and last half hour `cos the middle of SPR is totally tedious.

CROSS OF IRON has a much better script. Maybe the battle scenes of SPR are slightly gorier but at best they’re only as good as the ones in this film. I’d say this is Peckinpah`s best film. The editing during the battle scenes are absolutely superb as we see Soviet soldiers in slo mo, Germans in real time, cutting back to Soviets in real time then Germans in slo mo. Then seeing a cross cut with a Soviet and German dying at the same time.

A classic and unforgivably forgotten film set during the worst conflict in history. In my opinion the greatest WW2 film ever, surpassing even DAS BOOT