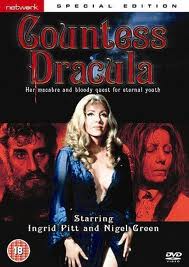 An old, evil countess (Ingrid Pitt, chewing the scenery) discovers she magically turns into a beautiful young woman by bathing in the blood of virgins. She poses as her daughter to get full control of her late husband’s estate and romance a young, handsome man. But the youthfulness only lasts a day or two. So she must kill again, and again, and again.

Pretty good Hammer horror film. The film looks great–beautiful settings; rich color and some nice directorial touches from Peter Sasdy. It also moves fairly quickly (about 90 minutes). But, with the sole exception of Pitt, the acting is pretty bad (especially Lesley Anne-Down) and Pitt has the all-time worst aging makeup I’ve ever seen. This detracts from the movie.

Still, if you’re a horror fan, it’s worth seeing. Warning: I think the print circulating on cable TV is cut…it has a PG rating, there’s very little violence and, while there is nudity, it’s pretty quick