Creature from the Black Lake 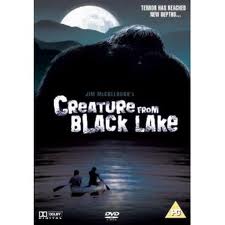 Boring, obvious “horror” film about 2 idiots who go to search for the title creature. Obviously this is just another ripoff of the legend of Bigfoot.

I saw this back in 1976 at a local theatre when I was 14. I went because the local paper gave it a positive write up. I also dragged along my 9 year old brother and his friends. Basically they LOVED it. They said it was scary and “cool”. I did not agree at all. I was bored and extremely angry–I expected them to SHOW the creature but (except for one half-way clear shot) they don’t. You hear it’s roar and you might see a hand or a foot but that’s about it. In retrospect this was probably a good idea–the unseen is much more scary than what we CAN see. But when you’re a young kid you could care less about subtlety–you want to SEE the monster.

This movie came (and went) without a trace. It hasn’t popped up on VHS or DVD yet (and hopefully won’t). I give it a 2 because it IS an OK monster movie for kids–YOUNG kids. All others–stay away.