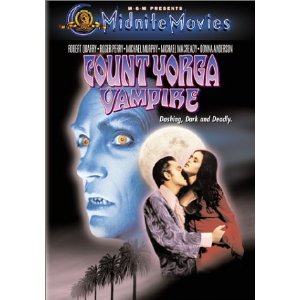 Count Yorga (Robert Quarry), a vampire, comes from Bulgaria to 1970 Los Angeles and starts making a coven of beautiful female vampires. Will their boyfriends be able to stop him?

This was a huge hit in 1970 because it was the first modern vampire film. Up until then all vampire films had been set in Europe in the 1800s or early 1900s. This was the first vampire film set in modern day. Still it isn’t a great film. It was originally shot with soft core sex scenes which were (pretty obviously) edited out and it was turned into a sleazy PG rated film. It was made on a very low budget (it shows) and suffers from some horrible 1970s fashions and dialogue. Also the makeup on the female vampires is pretty poor. Still this isn’t a total disaster either.

The script is actually pretty intelligent considering this was a fairly rushed production. The acting is good–especially by Quarry who makes an imposing vampire. Very subtle performance but he handles the violent scenes quite well too. It moves at a fairly quick pace and has a great bloody climax–pretty extreme for a PG film. This won’t impress audiences like it did in 1970 but it’s still not that bad.