Cannibal Holocaust (1977)
Ultimo mondo cannibale
A stone-age world of horrors … ONLY ONE SURVIVED. 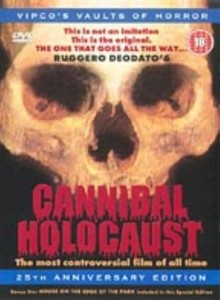 Review by Sven Soetemans
Bunch of SAVAGES !!!,
A four-headed team clumsily ends up stuck in a jungle. Pretty soon, two of them die (rather clumsy again) while savage aborigines are chasing the other two males. The duo depletes one last time when one of them disappears during a wild-river flow …does it have to be said…clumsy! The supposedly last cannibal tribe on earth imprisons the one man left, named Robert. They don’t start cooking him just yet, but fool around with him a little, first. He escapes and takes a local girl with him, who serves the role of beautiful hostage. However, the journey through the undiscovered jungle is hard, long and full of surprises.
Ruggero Deodato’s general rehearsal before unleashing the notorious `Cannibal Holocaust’ upon the world is an explicit horror film, but not as shocking or repulsive as its successor. This film merely serves as an old-fashioned adventure-movie, there were Cannibal Holocaust is a severely shocking ethical portrait. If you ignore all the illogicalness of this film, you’ll have yourself a good time. That’s a fact. It’s a rough and straight-to-the-point horror production with more than enough footage to keep you entertained…although a lot depends on your definition of entertainment, of course. Italian horror standards stand throughout the whole film: gore, sleaze and cruelty! Since so many things are happening during the first 20 minutes of `Jungle Holocaust’, the film tends to get tedious after a while…or so you would think! Surprisingly enough, there still are more than enough adrenalin-filled sequences that keep you alert and – and this really is positive in my book – Deodato gives an excellent portrayal of how someone is unintentionally driven into complete madness and a total loss of realism. Jungle Holocaust contains quite a lot of animal cruelty, which can be regarded as offensive by Italian horror-haters. The crocodile-dissection easily equals the vicious tortoise slaughtering in `Cannibal Holocaust’. The cannibals themselves are some of the wickedest I ever saw and they seem to follow some bizarre rituals, too. They show an unusual interest for male nudity and they don’t seem to worry too much about controversial handlings such as murdering an infant (pretty disturbing sequence that was). They do bring forward beautiful women, as Me Me Lai is the sexiest native girl I ever saw. Jungle Holocaust is essential viewing for Italian horror/sleaze fans. Not as memorable as `Holocaust’ or `Ferox’…but certainly worth your time.