Caligula (1979)
What would you have done if you had been given absolute power of life and death over everybody else in the whole world?

Review by Noel Bailey
Art or obscenity? Very much in the eye of the beholder!,

When discussing CALIGULA (That being the title by which it is predominantly known world-wide – not CALIGOLA !) it becomes necessary to distinguish WHICH version you are referring too. Personally I have had the (mis)fortune to see all three and they vary colossally – trust me! The original Penthouse-release which has been screened at mostly underground art-houses runs for over 210 minutes and contains scenes that would pale the most ardent voyeur or paedophilic raincoater! Full on rape with full-blown (poor choice of words, I realise) penetration, sodomy, erections every which way and total hard-core sexual perversion. Violence you just wouldn’t credit to being filmable let alone able to be released etc etc. I really don’t feel inclined to “review” this particular monstrosity. Just take it from me, it projects sick-filmaking to never-again-to-be-approached stomach churning levels. The “Director’s Cut” runs nearer 150 minutes. Most of the (really) hard-core stuff has been sliced and diced but still offers “enough” if you get my meaning! The “Edited Version” is almost sanitised and at barely 110 minutes (Less in the US and some other countries) has had almost two full hours of sex and violence trimmed from the original. The Directors Cut and Edited version I believe contain more “historical” footage. Many other “cuts” exist in various countries which have “trimmed” or “allowed” certain scenes according to individual censorship.

One thing remains inarguable however. This is a strictly one-off film or to put it another way..one, extremely “off” film! Question is? how did they get so many respectable people to appear in it? My guess is that actors such as Helen Mirren, Peter O’Toole and John Gielgud, were not made aware of anything much beyond the scenes they were in. Malcolm McDowell was a different proposition. After the experience of A CLOCKWORK ORANGE…probably nothing would have seemed to be too much of an excess! As the mad emperor, McDowell gives a credibly insane performance. His pursuit of his sister Drusilla pulls few punches, not that the average family would want to see this particular aspect. Tinto Brass who at best is a celluloid exploitationist ran hot and cold here. Exterior sets were surprisingly impressive. Interiors were rather less grand, running the gamut of acceptable to laughable (Curtains to hide the studio behind!)
Historically questionable, morally reprehensible and of dubious entertainment value CALIGULA is one of those films any serious film-buff needs to see. Just don’t either TELL anyone or TAKE anyone!

For a while it looked like it might. CALIGULA was a major box-office and critical flop (producer Guccione had to rent theatres in order to get it screened at all), and although the film was released on VHS to the home market so many censorship issues were raised that it was re-edited, and the edited version was the only one widely available for more than a decade. But now CALIGULA is on DVD, available in both edited “R” and original “Unrated” versions. And no doubt John Gielgud is glad he didn’t live to see it happen.
The only way to describe CALIGULA is to say it is something like DEEP THROAT meets David Lynch’s DUNE by way of Fellini having an off day. Vidal’s script fell into the hands of Penthouse publisher Bob Guccione, who used Vidal’s reputation to bankroll the project and lure the big name stars–and then threw out most of Vidal’s script and brought in soft-porn director Tinto Brass. Then, when Guccione felt Brass’ work wasn’t explicit enough, he and Giancarlo Lui photographed hardcore material on the sly.

On the plus side, those sets and costumes are often fantastically beautiful, and although the cinematography is commonplace it at least does them justice; the score is also very, very good. The most successful member of the cast is Helen Mirren, who manages to engage our interests and sympathies as the Empress Caesonia; Gielgud and O’Toole also escape in reasonably good form. The same cannot be said for McDowell, but in justice to him he doesn’t have much to work with.

The movie does possess a dark fascination, but ultimately it is an oddity, more interesting for its design and flat-out weirdness than for content. Some of the bodies on display (including McDowell’s and Mirren’s) are extremely beautiful, and some of the sex scenes work very well as pornography… but then again, some of them are so distasteful they might drive you to abstinence, and the bloody and grotesque nature of the film undercuts its eroticism. If you’re up to it, it is worth seeing once, but once is likely to be enough. 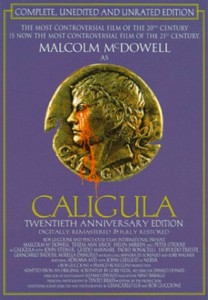 I saw it when it came to America in 1980 and was almost banned in Boston. I had just turned 18 and was curious so I went to see it. YUCK!!!! This movie was truly sick. Castration, disembowelment, mutilation, be headings, bestiality, necrophilia are all shoved in your face. I could care less if it’s historically accurate or not…whatever it is, it’s revolting!

This theatre was packed when I went. During the movie many people walked out…in disgust I’m assuming. I had to leave after the two hour mark. There was a bad taste in my movie (from the movie!), my stomach was in knots and I felt like I was going to throw up. That should tell you something.

Poor Malcolm McDowell and Helen Mirren (who admits she did it just for the money) suffer through the entire film. They give two great performances…much better than the film deserves.

A total piece of garbage. Avoid at all costs!