The first time was only a warning. 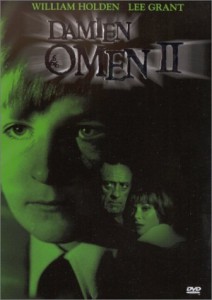 Review by Theo Robertson
We Didn’t Need A Sequel,

I thought THE OMEN was a great horror movie , much better than the over-hyped THE EXORCIST . In fact I thought it was so good that there was no way the original needed a sequel and this movie proves it . It fails for three obvious reasons
1 ) The audience know that Damien Thorn is the anti Christ hence we’re one step ahead of all the characters in the movie unlike in the original where we were shocked by the plot revelations
2) This possibly ties in with the first point . Several characters are aware of the fate of Damien’s parents but are very blas about it all . In other words these characters seem impossibly stupid
3) Damien Thorn is around 12 years old and very polite . Is there anything less menacing than a polite 12 year old child ?
The problem with sequels is that if they play out in an entirely different manner then fans of the first movie will be alienated , if they play out in the same way ( As is the case of this one ) then you’ve got a very predictable movie . In other words it’s a case of heads you lose , tails you don’t win . Aside from a couple of novelty deaths ( One of which was recently remade as a beer commercial ) there’s not much to recommend this movie . At least THE FINAL CONFLICT was entirely daft enough to be entertaining

Doesn’t improve with age,
I saw this when it first came out in 1978. Even at the age of 16 I wasn’t impressed. The only parts were the sometimes inventive murders that were in it. 25 years later it hasn’t improved much.

“The Omen” original was well-made, scary, inventive if totally unbelievable. It also had a grade-A cast and really worked. This sequel has a great cast also (Lee Grant, William Holden, Sylvia Sidney, Lew Ayres) working hard and doing their best…but it doesn’t work. The deaths, while inventive, are pretty tame and sometimes downright laughable (when a woman is hit by a truck it is so obviously a dummy it’s hysterical). The only death that was suspenseful and really worked was Ayres’ death under ice. The script is basically pretty dull and a one-note rehash of the original. Jonathan Scott-Taylor really tries as Damien but he’s defeated by the lines he has to say.

All in all it’s not horrible, but certainly not up to the original. Worth seeing if you’re in the mood for a fairly slow, mindless, tame horror film. Also it is William Holdens only horror film.