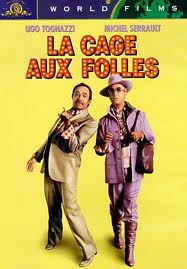 Cage aux folles, La (1978)
One of the best comedies (not only foreign films) ever made

I say that except in a few cases, the original never dissappoints. This is a prime example of that. The perfect French comedy about a gay couple, who have a son (It’s one of theirs) who is getting married. Since the son’s in laws are stuck up rich people, they have to hide they’re gayness for one night. Great (and hilarious) entertainment may have been later re-done, but it can never be matched. One of the best foreign (and comedic) films ever made. A+

I have fond memories of this film. It played in Boston in 1979–back then I was a closeted high school kid. I somehow got in (the film was R rated and I looked about 14) and loved it! It was funny, uplifting, gay positive and made me realize there is nothing wrong with being gay. Seeing it again over 20 years later it’s not as funny or uplifting as it once was but I still enjoyed it.

The plot is old hat and the movie is directed by the numbers but the script has some very funny lines and all the performances are great. Particularly funny are Michel Serrault (as the more feminine gay man) and Michel Galabru (as the minister of moral order). The final dinner party sequence is absolutely hysterical!

Some people have said this film has stereotyped gay characters and that Serrault’s constant screaming is annoying. I disagree–I found nothing offensive about the characters (there are gay men like Serrault–I’ve met them!) and his screaming is actually very fine. A very funny French farce–well worth seeing. Ignore the R rating–it only has that because of the subject matter (which was pretty risky for 1978). If it were rerated today it would easily get a PG-13.

Skip the two sequels and the Americanized remake “The Birdcage” in which they use the exact same script as the original–with all the same jokes and some bad new ones added in.