There has never been a motion picture adventure like… 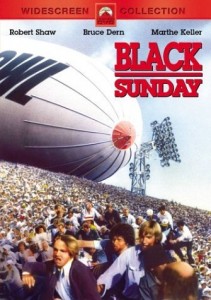 Despite being set in the 70s I couldn’t help noticing that Robert Shaw’s Mossad agent Kabakov is shown as being a violent ruthless cold blooded killer who’s almost as bad as the terrorists he’s hunting. This goes slightly against the common perception in much of the world at the time of Israelis being heroic and plucky freedom fighters striving to defeat terrorism and it should be remembered Israel carried out the legendary raid on Entebbe the year before. It wasn’t until Israel’s invasion of Lebanon in 1982 that this perception changed towards the state of Israel somewhat. Well I suppose the producers should be congratulated on bringing ambiguity to the story. Likewise the ” villain ” Lander is a terrorist motivated by the fact that his country has turned his back on him. Sent to fight people in South East Asia he was shot down and left to rot in a North Vietnamese POW camp and on returning home from the most dirty and needless war of the 20th century he finds that even his own wife has forgotten about him. The point being that terrorists are never born but made.

BLACK SUNDAY is a very good political thriller full of good but often-violent action scenes, which means it’s not a film for everyone. Likewise watching this seventies film in the 21st century, which involves a plot to kill tens of thousands of innocent people at a public event means, many viewers will be uneasy watching this. Sometimes you can take a plot and make it a little too realistic