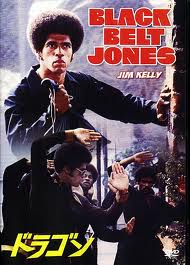 Were you also cheesed when Jim Kelly bought it in such a crappy way in Enter the Dragon?

Well here’s a movie for you! Black Belt Jones is a must for aficionados of martial arts films, blaxpoitation films, and cult films in general. It boasts probably the funniest opening fight scene that I’ve ever seen (unintentional or not? it’s difficult to tell in this film.

I have an acute feeling that everyone was just joking around and having a lot of fun), in which Jim Kelly aka Black Belt Jones (one of the greatest character names in cinema history, to be sure) ends the thing by shooting a bullet into a man’s ass.

It also boasts maybe the only fight scene where Scatman Crothers kicks some butt. And a scene where Jim Kelly kicks about a dozen guys out of train windows. And a set piece where everyone battles it out in a car wash with bubbly soap covering the scenery. The guy who plays Sidney also played the young black kid in The Omega Man, the one whom Charlton Heston tried to save.

It also contains more abuse to the testicles than any film I’ve ever seen – none of the good guys have any qualms in the least about attacking the male package. If you see it with a bunch of guys, expect loud groaning all through the film.

However much camp value there is, it does grow old during the course of the film. It’s still a funny and distracting film. 7/10